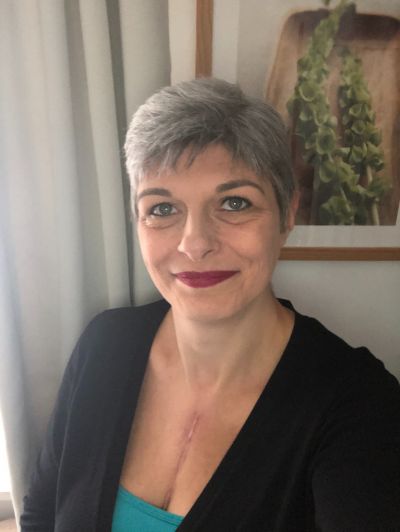 Angie's valve disease story started when she was a small girl after she was born with a hole in her heart. Fast forward 40 years and Angie's leaky valve began to deteriorate. After being told she needed an operation, a pandemic stopped the world in its tracks. However, despite the pressures on the health service, thanks to the brilliant work of the team at Harefield, Angie was able to receive her life-saving treatment.

This is her story

“My valve disease story started when I was a child, as I actually found out it was leaking when I had open-heart surgery in 1986 after I was born with a hole between the pumping chambers which needed to be operated on. But at that time the valve itself wasn’t causing any problems - it was just something to be kept an eye on. So this was really my second open-heart surgery!

Fast forward to 2014, and I started having really random heartbeats. It felt like it was stopping, missing a beat and then letting out a thumping sound. I went to see the doctor, who diagnosed me with atrial fibrillation. I moved away and kept an eye on things, but didn’t see my Cardiologist for a few years. Still, then when I came back, it started doing it again, and I was tired all the time, and my dad told me to go and see my Cardiologist, and from then on I started getting yearly appointments.

It wasn’t until October last year when I was feeling unwell that the Cardiologist told me they would have to operate on my valve in the future. I was always tired, really drained and kept getting breathless. I led a hectic lifestyle, so I always put it down to having two jobs, a social life, and maybe just overdoing it a bit. The funny thing is that I didn’t really notice the physical changes; it was people close to me who said I was looking very pale.

In November last year, the Cardiologist said they wanted to run a series of tests. First, I had an MRI, then an echo, then transesophageal echo, and then an angiogram. Initially, they said I would need surgery in 3-5 years as I was only 45 and so still very young. However, a couple of weeks after the tests the Cardiologist is on the phone telling me it was worse than just a leaky valve, and that it had become very enlarged. 3-5 years became a year or two, then all of a sudden they’re saying we’re gonna have to be doing this as soon as possible.

I remember that call well. I was on my lunch at work, walking down Staines high-street, and I had to stop in my tracks and call my dad.. and have a glass of wine.

And then the world came to a stop in March.

The hospital said that when they thought they could operate safely, I would be called in. I was thinking “bloody hell world, give me a break!”

Then in June, I got the call saying they could bring me in next week. People ask if I was scared of COVID-19 before going in, but I actually felt very secure going to Harefield. It’s a specialist hospital for lungs and heart, and I knew the right precautions were being taken to protect me and treat me safely. And when I got there, they were just amazing. I had a COVID test before my angiogram, then another a week before I was admitted to the hospital, and then another when I was in the hospital. I felt safe and secure all the time.

The only thing I found was that for me, it was a lonely time because I wasn’t allowed any visitors. I was in for 13 days, and it is a lot to go through on your own. However, the staff went to all lengths to give me that comfort, and I had a great time with so many of them. They were such beautiful people.

I had my open heart surgery on July 4th. I had an aortic valve replacement, a graft on the aortic root and a ring on the mitral valve. I chose to have an innovative tissue valve so that I wasn’t required to take warfarin for the rest of my life. I just remember thinking, here I am having my second open-heart surgery before I was even 50!

After I was discharged, I spent 7 weeks at my friends' in the countryside. I’m a single woman, so I needed some help until I could start getting back on my feet again. All in all, though, for that time, I was just bored. It’s a long time to be so restricted. Luckily they live in the countryside so I was able to do lots of little walks around the garden. It was boring, though, and I found that people were scared to visit me because of COVID, which presented a real mental challenge.

I found that mental strain a particular challenge. And I would say to anyone who is going through this type of surgery to prepare yourself mentally because it can knock you for six. The whole thing really knocked me sideways. The experience from the appointments last year, to the disruption of COVID, then in the hospital on my own was a lot to deal with. And then recovering from the physical strain of surgery presents its own challenge. So just be prepared, it might not happen to everyone, but it could happen to anyone.

All in all, I’m just incredibly thankful to my Cardiologist and everyone at Harefield for everything they did for me. Both in terms of my surgery and their comfort and support. They were simply amazing. I could not fault a single thing about that hospital. I don’t even have the words to say about them - but I know I was definitely treated in the right place.”

Thank you, Angie, for your incredible story, and well done to Mr Bahrami and the team at Harefield Hospital. Heart Valve Voice CEO Wil Woan said "Angie's story shines a light on the incredible work heart teams are doing up and down the country to treat valve disease patients safely and timely. It should give comfort to anyone awaiting valve disease treatment, and give them the confidence to go to the doctor if their symptoms deteriorate. Angie also talks candidly about the mental challenges of valve disease treatment, especially under the pressure of COVID, and I think it will be of huge comfort to anyone who feels the same to know that they are not alone in feeling this way. Thank you to Angie for sharing her story, and well done to the team at Harefield."