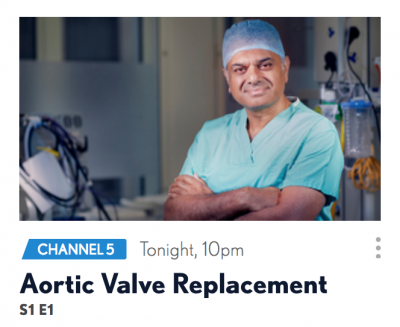 On 14 November, Channel 5 provided a rare opportunity for television viewers by inviting them inside a operating theatre at St Bartholomew's Hospital while consultant cardiac surgeon, Mr Kulvinder Lall, performed open heart surgery on patient Kamal, aged 69. The surgery involved Mr Lall replacing an aortic valve for his patient, a surgery that many of our patient ambassadors have been through themselves.

On 14 November, Channel 5 provided a rare opportunity for television viewers by inviting them inside a operating theatre at St Bartholomew's Hospital while consultant cardiac surgeon, Mr Kulvinder Lall, performed open heart surgery on patient Kamal, aged 69. The surgery involved Mr Lall replacing an aortic valve for his patient, a surgery that many of our patient ambassadors have been through themselves.

The series hopes to take the mystery out of surgery and show in real time what happens when patients go into the operating theatre. The surgery performed my Mr Lall, is the most common technique for aortic valve replacement, to perform surgery on the valves via the chest, called a sternotomy. This is when the surgeon divides the breastbone to gain access to the heart. This technique is useful when a wide exposure to the heart is required to perform the operation.

The operation was performed step by step on live TV by Mr Lall and his team, with Mr Neil Roberts, consultant heart surgeon from Barts, on hand to talk the audience through the surgery. The live operation gave viewers an insight into the team involved in such an intricate surgery and how well they work together. Each member of the team at Bart’s Heart Centre has a specialised role in the surgery and as could be seen, they all work together like a finely tuned machine to ensure the patient receives the best care possible.

As explained by a number of the clinicians involved, including Mr Lall and Mr Roberts who perform surgeries on a regular basis, it is always amazing to see a patient’s heart beating in front of them, and they weren’t wrong as viewers were in awe at the sight of Kamal’s beating heart when it was revealed by Mr Lall. Once the heart had been accessed and taken over by the perfusionists, Mr Lall and his team set to work replacing the aortic valve. As Mr Lall explained, Kamal presented with symptoms of heart valve disease including breathlessness and fatigue and due to their severity, he was referred for an aortic valve replacement. Patients who have severe aortic stenosis and are left untreated are at a very high risk of heart failure and death.

Once revealed, it was clear to see that Kamal’s aortic valve was heavily calcified and in clear need of replacement. Mr Lall and his team cut out the diseased valve and any remaining calcification and replaced it with a new tissue valve that will allow the blood to flow freely through Kamal’s heart once again. What The Operation was able to show was how far treatment for heart valve disease has come over the years and how precise the work is that, teams like the one at Bart’s Heart Centre perform. Viewers got to see the expert work of Mr Lall and his team and got a first hand insight into the technology available to give patients a renewed quality of life.

Credit must also be paid to the patient and their family who generously provided the opportunity to have this life changing surgery filmed for us all to see. Interviews with Kamal and his daughter showed how important this life saving surgery was to Kamal and the people that mean the most in his life. This was an excellent insight into the patient experience and what to expect from treatments such as this for both the patients and their loved ones.

“It was an amazing opportunity to be able to give the public an inside look at what goes on behind the theatre doors,” said Mr Roberts. “It is our hope that by televising life-changing surgeries like aortic valve replacements, we can highlight that life-saving treatments are available and can dramatically change lives in a matter of hours. I am very grateful to Mr Lall and his brilliant team as well as the amazing patient for allowing us to televise an important event such as this and hope that more people see that treatment for severe heart valve disease is vital and that there is brilliant work being done across the UK to bring a quality of life back to valve disease patient’s lives”

The show can be viewed on catch up on Channel Five.