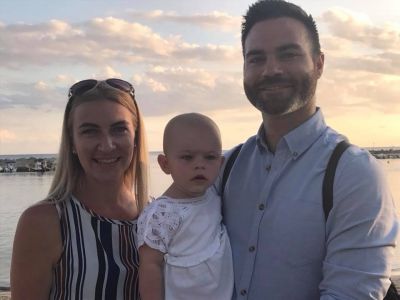 Bridie, her daughter Darcie and her husband.

Three years ago there was a black cloud over Christmas when Bridie Lilleker (33) was told that ‘under no circumstances’ could she try for a baby due to the extreme pressure it would put on her heart. Just eight weeks previously, she’d been diagnosed with severe mitral valve regurgitation, and the day before Christmas Eve she saw her surgeon. Her keyhole operation went ahead in January 2016 and this past Christmas (2018) was the best ever because they were able to celebrate it with baby Darcie!

Bridie, a primary school teacher, was only six years old when she was first told she had mitral regurgitation. During a bout of tonsillitis as a girl and a run of bad chests and nasty coughs, a routine stethoscope test at her GP’s surgery had picked up a murmur and she was sent to Rotherham General Hospital for an echocardiogram (ECG)

“They said because of the leaky mitral valve I’d need an echocardiogram every three years. I wasn’t allowed to have my ears pierced and I had to take antibiotics before dentistry because of the risk of infection. I don’t remember any breathlessness, pain or dizziness, and life went on as normal until I became a full time teacher. It was then that I noticed that I was generally tired, but then teachers always are!”

When it was time for her routine scan in October 2015, Bridie was married and hoping for a baby, so she was shocked to be told that her heart was not strong enough to sustain a pregnancy and she needed treatment early in the new year of 2016. She was told she could receive a minimally invasive keyhole procedure which would mean an easier recovery.

“The thought of what lay ahead so soon after Christmas really put a black cloud over the festivities. But I needn’t have worried, the keyhole incisions are miniscule. I went into Sheffield Northern General for the procedure on a Tuesday and was back home on Thursday, although my husband and parents think I should probably have stayed in hospital a few more days.”

By March, Bridie was signed off by her surgeon Steven Hunter (Who happened to be an old school friend of her Dad). He told her she could get on trying for a baby – although when she did fall pregnant she had to go to the specialist cardiology clinic in Leeds for a foetal scan, to make sure the baby had no heart defect. Doctors continued to keep a special eye on her, and at seven months she went back for an ECG test to confirm that her own heart was coping well with her pregnancy.

After a year of extended maternity leave, Bridie is now back to teaching three days a week, and is enjoying the fact she was able to introduce baby daughter Darcie to Father Christmas for the first time last year.

All the best to you and your growing family Bridie!