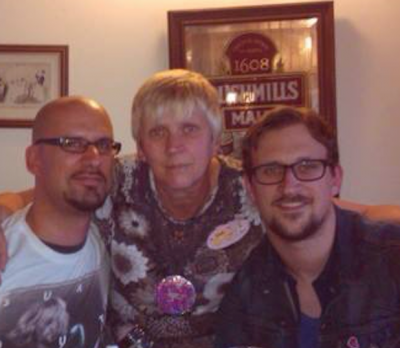 Sandra and her sons

I had been experiencing chest pains when out walking for about six months. My children kept telling me to get it checked out, but I just told them it was a sign I was getting older and I was fine. I frequently used to get breathless and light headed if I walked too quickly but these symptoms stopped if I paused and rested, so didn’t think much of it.

I was working as a teaching assistant and some days felt so tired, I could have curled up in the book corner and gone to sleep! Everything was such an effort and I felt I couldn't keep up with the work but again just put this down to my age and struggled on. One day, I felt so rough my colleagues sent me home. The next day I managed to get an emergency appointment with the doctor. He listened to my chest, then asked me if I knew that I had a heart murmur. I had been made aware of it when I was pregnant with my first child 34 years ago but no one had mentioned it since. I asked if the chest pain and breathlessness I had been feeling had anything to do with the murmur. At that point, my doctor brought another doctor in to listen to my chest as well. I was then told I was being fast tracked to the cardiac unit at the Great Western Hospital in Swindon. I was also told I had a severe chest infection, signed off of work for two weeks and prescribed antibiotics as well.

I attended the cardiac unit where they gave me an ECG, weighed me and measured my height. I then saw a nurse who asked lots of questions and examined me. She then told me that my ECG reading was abnormal and I would need further tests to see what was happening. My first test was an angiogram and then six days later I had another ECG done. Again I was asked lots of questions about my symptoms and how they had been worsening over the last six months. After the tests, I was told one of my heart valveswas not working properly and that I would need open heart surgery to replace the valve.

My name was added to the list to see a heart surgeon, and I was sent home with the instructions to rest as much as possible. I now realise this was to make sure I didn't strain my heart. Now I had my diagnosis, it was a case of awaiting my appointment with the cardiac surgeon who was to perform my open heart surgery. This took place at the end of February 2016, and so far I am recovering well. I look forward to updating you with my post-surgery progress soon!