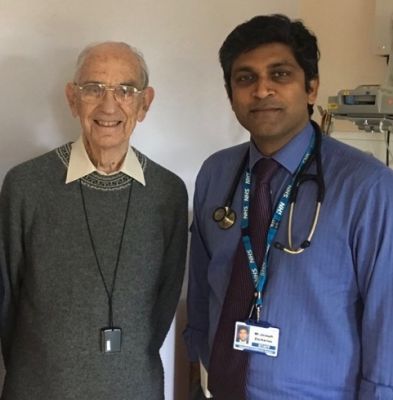 At the age of 92 Norman Thorpe has led a long and active life. While he has inevitably slowed down in his nineties, he has never let anything stop him from remaining independent and doing the activities he enjoys. It wasn’t until a trip to visit his daughter in Germany that he noticed he wasn’t feeling quite right and not long after his return he was diagnosed with heart valve disease.

Norman was born on the 27 November, 1924 and has lived a very fit and active life ever since. His favourite activity is long distance walking and he has been on many exciting walking adventures over the years including the Tour du Mont Blanc, the Canyons of Colorado, hiking in Machu Picchu and the Andes and touring the Anti-Atlas Mountains in Morocco. After the sad loss of his lovely wife Mary to Alzheimers in 2015, Norman has been determined to live as independent a life as possible and has continued to do all of his own cooking, housework and gardening without any outside help. He has kept the walking up too, making sure to celebrate each birthday with a walk to the top of Pendle Hill near his hometown of Clitheroe. Unfortunately, he didn’t make it for his 92nd birthday as this was the year he was diagnosed and treated for heart valve disease.

Norman had never had too many health concerns to contend with and heart valve disease was certainly not something he had heard of, let alone something he thought he was at risk of developing. That is, not until he took a trip to Germany to visit his daughter in 2016. Just after his arrival he noticed that his ankles and feet had swollen so much he could not put his shoes on. This wasn’t something Norman was used to so he paid a visit to the local GP where he was prescribed some medication which seemed to be effective for the time being.

However, when he was on holiday in his caravan not long after his return from Germany, he began to experience more symptoms such as becoming easily tired and having an irregular pulse. He spoke to his GP and was given an echocardiogram (ECG). While waiting for the results, Norman found he was having difficulty breathing one night and he sat up in bed fighting to take a breath. This experience was very concerning and he met with his GP immediately where where he was referred for further tests.

His symptoms were quickly worsening and Norman was finding himself always short of breath and struggling with his everyday activities like climbing the stairs. Norman continued going through tests and being admitted for short periods into the hospital as they established cause of his symptoms and irregular heart beat. On 23 January, Norman met Mr Joseph Zacharias, Consultant Cardiothoracic Surgeon and Clinical Director at the Lancashire Cardiac Centre. Mr Zacharias confirmed the diagnosis of mitral stenosis and scheduled Norman for a mitral valve replacement on 29 March 2017.

A few months have gone by since Norman’s surgery and he is beginning to feel himself getting back to normal. His fitness is gradually returning and he gets out for walks as often as he can. He is also keeping on top of his household chores and his gardening including trimming the hedges and mowing the lawn as needed. While he may never get to the fitness levels he held before, at 92 he is still going strong. He’s even found the energy to get out and go for regular bike rides and he makes sure he is still involved in his church on Sundays.

His family is extremely pleased with his recovery and couldn’t be happier about the treatment he received. His son, who accompanied him to all of his appointments felt that his father was well cared for by Mr Zacharias and his team and that they did an excellent job keeping them both well informed throughout the whole experience.

“I was very well treated by all of the staff at both Blackburn hospital and the Lancashire Cardiac Centre. Everyone was so helpful and they answered all of the questions that my son and I had which helped to put us at ease.” said Norman, “I had never heard of heart valve disease before my diagnosis, but after talking to several of my friends I have learned it is quite common. I’m very grateful that my valve disease was found and treated so quickly and it feels great to be able to walk again without running out of breath. Thank you to Mr Zacharias and his team for helping me get my energy back.”

All the best with your recovery Norman!