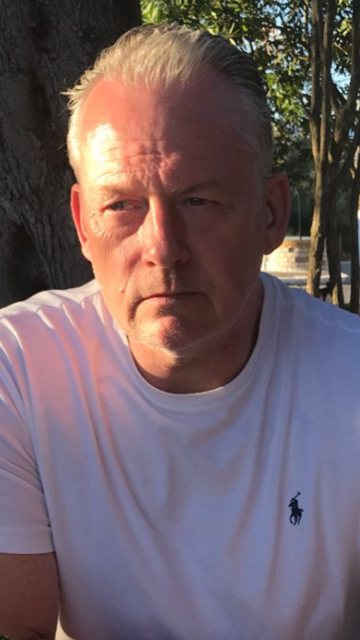 Aged 53, Mike was training for Insanity, an intensive fitness programme, as he had been doing for the past few years. Ordinarily, he has a low resting heart rate which will usually settle in a predictable way following a work out. However, one session near Christmas 2014 it settled just under 70, which struck him as unusual. He’d always monitored his heart rate closely, and explained to his wife he felt he was running at 85%. He began to get breathless, and climbing the stairs required extra effort. Something was clearly not right.

Mike was particularly busy and was travelling a lot for work, so attributed symptoms to being run down, he visited his doctor, who diagnosed a lung infection, which would explain the symptoms he’d been experiencing, so he thought no more of it.

However the doctor also referred him to the hospital, and despite continuing to train he was finding lots of things still difficult. An X-ray and ECG revealed a lung infection, as the doctor had suspected, and a slight heart murmur. Further tests then revealed that his heart was twice the size of an average heart and that he had heart valve disease.

Mike has always been a very strong person, both physically and mentally. Despite his mental resilience, the diagnosis did effect him. “I was stunned, as was my wife when I told her. It was April 2nd and she said “if you’d told me this yesterday, I would have thought you’d be joking’; a cruel April fools.” Mike’s philosophy is that a journey of 1,000 miles begins with one step, so he decided to just focus on how to make my recovery a success. Like many patients, he didn't want to know the details of the procedure, but he asked plenty of questions about his rehabilitation and the aftercare process.

Mike was treated initially at the Countess of Chester Hospital by Prof Somouro and his team, who were all fantastic although he had his surgery at Liverpool Heart and Chest Hospital under the care of Manoj Kuduvalli and Alfred Hing. Mike had an aortic valve replacement and because of the complications with his heart size, a tissue valve was the only option for him. During the first week after surgery Mike suffered a brief episode of Atrial Fibrillation, but thankfully after two days it stopped. Each day his health was improving and that was a positive thing to focus on.

Two weeks after his treatment Mike started a ten week cardiac rehabilitation course and considered himself fortunate to be working with three wonderful staff members who understood his specific fitness needs, and soon got him back to exercising in a safe, but intensive, way.

“My advice to anyone recovering from heart valve disease treatment, is not be afraid. Push as hard as you can and are told to, excepting the parameters that the cardiac staff set for you. Walk as far as you can every single day making sure you hydrate effectively too. It really does help! It is important to remain positive even when slight set backs come your way.” Mike recollects.

Sarah, Mike’s wife said “His experience of heart valve disease initially made him feel vulnerable, which is something I had never really seen before. He had been running at 85% for months, and now, thanks to his tissue valve, he’s back to 100%.” “You cannot change the hand you’ve been dealt but you’re in charge of them. The treatment options available mean you will come out the other side fitter and stronger than before.” adds Mike.