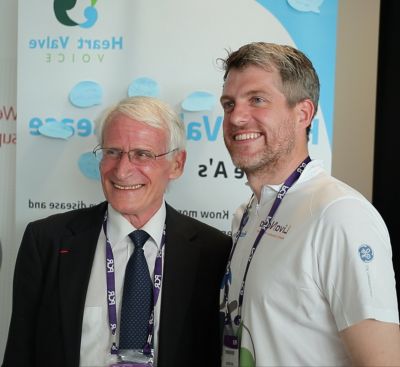 It was a wonderful moment when TAVI pioneer, Professor Alain Cribier (Rouen, France) took time out of EuroPCR to meet the Heart Valve Voice cycle team and pledge his support to raising awareness of valve disease.

When, Prof. Cribier first presented the concept of implanting a replacement aortic valve via a balloon expanding catheter, he was told that it was “stupidest idea ever presented at a medical congress”. However, undeterred by the sceptics, he and his team successfully undertook the first ever human TAVI implant in April 2002.

“The implantation of a stent meant that the diseased valve could be kept open in a satisfactory way. The stent had to be the right size so that once in place it wouldn’t obstruct the coronary arteries located just above the aortic valve, and it wouldn’t damage the mitral valve which is located just below” explains Prof. Cribier.

Aortic stenosis is a serious, life-threatening illness for which the cause is unknown. The valve is unable to fully open due to the fibrous thickening and calcium deposits, and this limits the opening of the aortic orifice thereby preventing blood from reaching the aorta. The consequences of this are serious. Symptoms include breathlessness, dizziness or fainting episodes. It can also cause sudden death.

Prior to the advent of TAVI, many patients were unable to receive valve replacement due to their frail state, their age or the presence of other associated diseases. However, thanks to the determination of Prof. Cribier, the vast majority of patients can now be treated if the disease is diagnosed in time. That’s why Heart Valve Voice is so proud to have this world-renowned interventional cardiologist as a supporter of the charity.

You can see Alain pledge his support to our European Collaboration on the Five A Patient Action Plan on our video here.