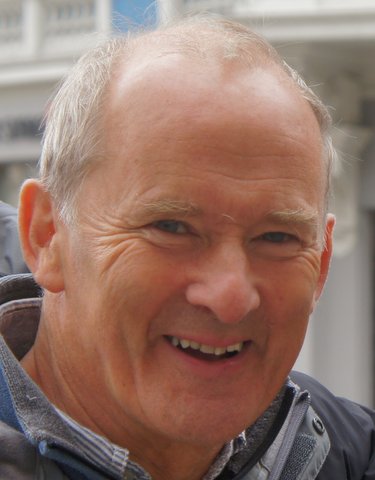 73-year-old Nigel Masterton, from Edinburgh was diagnosed with a 'sticky valve' while on a trial assessing the impact of drugs on patients with aortic stenosis. After opting to have minimal invasive surgery, a complication during surgery left him in ITU. Despite this, and thanks to the extroaridnary efforts of the ITU staff, Nigel was back home with his wife and back walking the streets of Edinburgh.

“The valve replacement requirement was the first time I'd been overnight in the hospital in my entire life. I have been fortunate in always having been been a very healthy and active person. My story starts, following my retirement, when I began to get involved in medical research.  I would sit on committees, as a lay member, and we would review various trials to verify whether they met the required ethical standards. Occasionally I would go on a trial as a participant so as to better understand the process. In 2015, one came up about aortic stenosis that particularly interested me. They were looking to see the potential effect of drugs on aortic stenosis, and part of it involved me getting ECG's and MRI's.

During this process, one of the doctors noticed that my valve's blood flow was at 4.7, rather than 1.2. i.e. I had a “sticky” valve. She suggested it might be worth getting it checked.  The subsequent checks ultimately led to my having surgery. I can count myself lucky in this as I was completely asymptomatic at the time, but, thanks to the trial, caught things early

I met with my surgeon, who took the view that, apart from this issue, I was in perfect health and that since there was a minimal risk, he would be happy to progress with surgery. Furthermore, he said he would like to use an alternative procedure which was less invasive in that it did not require opening up the chest. It was to be was one of the first times he had used it. He fully explained the risks, which I knew to be low, albeit all operations have potential for downside, and readily agreed to the surgery. Unfortunately for myself, my family and my surgeon, I proved to be one of the unlucky ones.

During the procedure, there were complications, and blood was found to be leaking into my stomach. First they opened up my chest, then a stomach surgeon was summoned and he opened up my stomach. So much for “minimally invasive”!!  Then, having identified the source of the problem the team were able to complete the procedure and rush me into ICU, where I was to spend the next 3 weeks under round the clock care.

I like to keep a diary of my health just so I have a complete history for future clinicians to refer to. Obviously during this time in ICU and the week that followed in HDU, my children kept my diary going. It is only by referring to this now that I am able to tell some of this story as I was clearly totally unaware of what was happening.  I only remember going to surgery and then waking up, fully conscious, in a cardiac ward nearly a month later.

As I understand it, my daughter was superb throughout the whole thing. As a GP, she gave valuable guidance to my family on my medical state, and she kept everyone abreast with regular newsy emails - which I know, for a fact, were hugely appreciated..

Once I was admitted to the cardiac ward I felt pretty good, largely because the month in ICU/HDU meant my wounds were well on the mend. On the second day there, I asked, quite assertively, if they could take my feeding tube out  In exchange I promised to eat what was put in front of me. And it wasn't easy, but I made myself do it. Soon I got to trying out other things. I would get up and walk round the ward and then, when no-one was looking, sneak down the corridors. By day 4 or 5 I had found some stairs and practiced going up and down, slowly at first I admit but quite soon I got stronger and more confident.

After some 10 days, I asked to go home, and once they saw how I could manage walking and stairs the doctors – albeit surprised - happily agreed.

Overall the recovery process was straightforward. As long as you're motivated and keep challenging yourself, you soon recover. I set myself targets. Where I live in Edinburgh is about 900 metres from the Botanical Gardens, and I used that as my medium term challenge. Day one all I had to do was get to the first lamp-post and back, which was no distance at all, but it was enough. Gradually over three weeks or a month, I built up to being able to get there and back without stopping.

Like everyone who comes through a medical crisis, I cannot thank the medical team enough. Their care  - especially that of the ICU staff - was just unbelievable. They just kept going, in spite of the odds being stacked against success, and it is all down to them that I am here today. If there hadn't been the complication during the operation, I truly believe it would have been a walk in the park. Even with all the associated trauma let me assure any reader that I am very happy, and have not one single regret, that I opted to have my valve replaced.

My doctors were frankly astonished that I got back to normal as quickly as I did. OK, I was lucky that, prior to the operation, I was so fit and healthy. As a result my body recovered quickly but, with the new valve now 100% settled in, everything is as it was before. So to anyone thinking of having the procedure I would strongly recommend it. The benefits of having a new valve, especially should you be suffering shortness of breath or associated symptoms, far outweighs the risk. And after a year you’ll forget it’s even there.”

Heart Valve Voice CEO, Wil Woan, said, "thank you, Nigel, for sharing your incredible story. Nigel's story highlights that with any surgery there are always risks attached, but we are lucky to have one of the best health services in the world. As Nigel rightly points out, despite the challenges he faced, aortic valve replacement surgery is safe, and we must all put the trust in our clinicians to treat us timely and safely. Well done to Nigel with his recovery, and to the team in Edinburgh for their brilliant work."