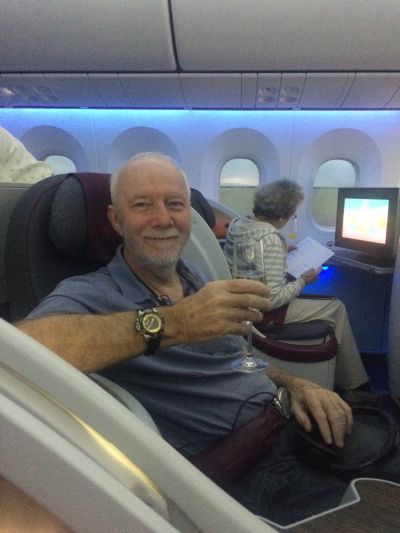 Martyn O'Connor first had valve disease surgery to replace his aortic valve 11 years ago. After his valve began to deteriorate, urgent intervention was required, and thanks to the excellent team at Morriston Hospital, Swansea, he was able to receive his life-saving treatment, and was discharged in a matter of days.

"This part of my story starts about 11 years ago when I had open-heart surgery to replace my aortic valve. Since then, I've obviously always been aware of heart valve disease, but it had never really impacted my life after my original surgery.

Then, when I was 68,  I went skydiving, and because I was over 40, they had to give me a medical. I was generally very fit and healthy and have always been a very active person - even after my first operation - and enjoy going windsurfing, driving rally cars and more. The medic said she would listen to my heart, and when she did, she heard a murmur, which needed investigating. So I wasn't allowed to jump!! And all my colleagues went up and jumped out of the bloody plane without me!!

I went to my GP, who said I was healthy, but I would get an echo to see my heart - and that's when they realised my valve was beginning to deteriorate.

At the time, I was managing fine, still exercising, and didn't really think I had any symptoms. I was able to function as normal, but looking back now, I was getting a bit out of breath when I was going up hills. Apart from that breathlessness, I wasn't really noticing symptoms on a day to day basis.

At my yearly echo, they said my velocity had increased about 40% and the valve needed attention. It was quite a surprise to me as I felt like I was still functioning normally.

After my original heart valve surgery, I joined a cardiac rehab class, and since my op, I have always kept it up. I like to exercise quite hard in those classes, and looking back, I was getting a bit less capable of doing that, so that was maybe a sign that something was up, but then I thought it could have been just me getting older.

After my echo, I met with the TAVI team and Mr Kumar, who had done my original operation 11 years ago. Because of the delays due to COVID and my urgent need, they were reluctant to do another surgical implant, but the original valve replacement was small, which made TAVI more complicated. But because of the deterioration, we needed to get it done early.

I had a long conversation with Dr Smith, and we went through the different options. On the morning of the operation, it transpired that it was to be done by Professor Chase. He came and had a chat and he said they could expand my original valve using a balloon and then fit a larger valve inside it. And that's what happened.

I had heard of TAVI before my original op 11 years ago, and so when I spoke to Dr Smith, it was just an update on statistics and his experiences over the past 11 years, and the pros and cons. And I was reassured and felt like it was the sensible option to take.

I went in on Sunday, had my procedure on Monday afternoon, and they chucked me out on Tuesday!! It was that quick.

People ask if I was worried about COVID before going in, but I was fairly laid back. I was tested three days before I went in and was put on a green ward (COVID clean), and it felt like everyone was taking every precaution necessary to keep me safe. I'm careful in the contact I have, respect the rules and I just treat it very sensibly.

Since my operation, I was doing some mild exercise on Zoom, and I had a slight pain in my chest. The next morning I still had it, so I thought I need to get this checked. I called my GP, who sent me to casualty, and they did an ECG and some bloods. They wanted to keep me in overnight to keep an eye on me, and the next day I did a stress echo and everything was ok. I feel better now, but you can never be too careful when it comes to your heart.

Now I'm back home, back at work, and while I'm not planning a skydive anytime soon, I am looking forward to getting back to exercising and enjoying life when things get back to normal."

Thank you, Martyn, for sharing your valve disease story.