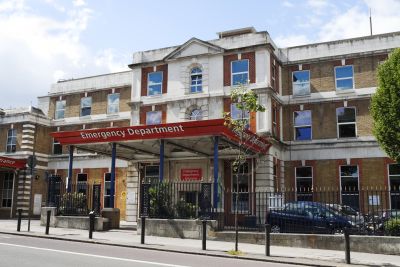 ​In response to the outbreak of Covid-19 NHS hospitals across the country suspended non-urgent elective surgeries in a bid to manage the strain placed on hospitals in controlling the virus. As Trusts look to manage non-Covid-19 related critical services, NHS hospitals and the private sector are working together to attempt to increase treatment capacities.

While the outbreak of Covid-19 has placed unprecedented pressure on the NHS, Public Health England's admissions data points towards a concerning trend of people avoiding hospitals out of fear of contracting Covid-19. While concerns around Covid-19 are understandable, by not receiving urgent treatments, they may be putting their lives at risk.

Peter Cobley and Sue Shanks were both treated by the team at Kings College Hospital, London during the outbreak. With both requiring interventions, they were admitted to London Bridge Hospital (currently part of the NHS activity in the private sector) to receive their intervention in a timely, effective and safe manner.

Peter Cobley (75) was initially admitted to the hospital for treatment with an infection. After receiving an echocardiogram, Peter was diagnosed with Aortic Stenosis and told that he needed urgent intervention. Before being diagnosed, Peter had experienced symptoms of breathlessness and dizziness, but after attributing them to signs of ageing, his Aortic Stenosis had deteriorated and become severe.

"Looking back, I can't believe how unwell I was before. It's easy sometimes to explain away little changes, but those little changes add up and can create a big problem. People have asked me if I was worried about Covid-19, and in many respects, I was. I didn't think I would be able to receive my treatment and was concerned about the big waiting lists that were building up. Still, it got to the point where those concerns didn't matter, and I had to put my faith in the good hands of Professor MacCarthy and his team."

Once Peter and Professor MacCarthy had decided that TAVI was the most suitable treatment option for him, he was sent for a swab test for a Covid-19 and waited to be taken to London Bridge Hospital for treatment.

"We decided to go forward with the TAVI treatment and then to avoid cross-contamination between hospitals they sent me home before my transfer to London Bridge. I knew that all precautions were taken to protect me and others. The staff at Kings College and London Bridge put my mind at ease, and I felt like I could focus on the treatment and getting better.

After being transferred to London Bridge, Peter received a TAVI, and after just two days he was able to be discharged back to his home and his family.

"I'm so grateful to Professor Phil McCarthy and Kings College Hospital for being so swift in my treatment. What can I say about my treatment? It was like a miracle. I've been calling myself 'Bionic Peter' ever since they discharged me!! I didn't realise how much my symptoms were holding me back, and now I'm more active than ever, even though I'm practising social distancing.'

Sue Shanks (77) had pre-existing heart abolition when she got diagnosed with heart valve disease in 2008. However, due to the lack of treatment options, it was decided that she wasn't treatable. In 2020, and thanks to the advancements in treatments, a Geriatrician proposed the idea of trying a TAVI as it was less invasive than open-heart surgery.

"To hear that there was a possibility of being treated was a bit overwhelming at first. However, being in the middle of pandemic didn't give me much hope of receiving my TAVI anytime soon. I suspected I would wait and see what the situation was with the waiting lists after the crisis had subsided. To be honest, I thought even when that time, I would be at the back of the line."

Like Peter, Sue was tested for Covid-19 at Kings College Hospital, before being sent home. She underwent her TAVI at London Bridge Hospital, and within two nights, she was back home.

"My treatment was so quick and easy, and I chuckle thinking about how simple everything eventually was. After my diagnosis in 2008 and everything that went with it, I hadn't really thought of this day. I never expected to be treated for my heart valve disease, never mind having such an easy time with the recovery."

Access to swift and timely treatments has meant that patients like Peter and Sue aren't left on the waiting list. Through the collaborative approach between the NHS and private sector, Kings College Hospital has been able to add some capacity to treat heart valve disease patients, while taking every necessary precaution to limit contamination and of COVId-19 an ensure patient safety.

"I want to thank Professor MacCarthy and the teams at Kings College Hospital and London Bridge Hospital. Their professionalism gave me the confidence I was in the best possible hands, and their care and compassion made me feel comfortable and safe. I look at how I am now, compared to how I was before my TAVI, and I feel a debt of gratitude to them for giving me this new lease of life. Thank you, everyone!" Sue.

Prof MacCarthy said "We always worry about patients with aortic stenosis on our waiting lists and we were particularly concerned about them when COVID looked likely to delay things significantly. Thanks to the brilliant collaboration between the teams at King's and the London Bridge Hospital, we have been able to design pathways to get patients like Peter and Sue out of isolation in their homes to a safe, COVID-free environment, do their TAVI procedure and get them home safely – with their valve disease definitively treated."