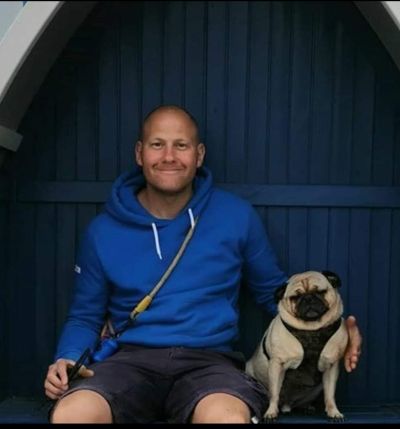 At the beginning of 2021, Fireman, Joe Munro, had just set himself a challenge to run 5 kilometres every day. Then, after feeling unwell at work one day, his GP listened to his heart and heard a murmur. A subsequent echo found he had severe aortic stenosis, and required urgent intervention. Now, just a year later, he is back at work with his watch, fighting fires and saving lives.

This is his heart valve disease story:

"My heart valve disease story is a bit of a strange one because prior to being diagnosed I was very fit. I did the London marathon, and at the beginning of last year, I challenged myself to run 5km every day for the entire year. With that and being a firefighter, I’ve always been in good physical health.

Then at the beginning of the year, my dad got diagnosed with cancer, and around the same time my body seemed to go really weird. I was feeling fatigued, losing weight, and my body just felt wrong. I thorough it was anxiety, and it was all to do with my dad.

Then I was at work on the run, and it felt like my body was shaking. I spoke to the officer in charge, phoned 111, and went to the GP. He listened to my chest and heard a murmur. He asked me a few questions, do I get chest pain or shortness of breath etc. He said chances are it’s an innocent murmur, but told me to see my GP. Then I had an ECG, and they said something is going on there, and after an echo, they discovered I had a bicuspid valve.

I had that on March 15th 2021, and got a call the next day saying they want to see me tomorrow - and that sent alarm bells. I know the NHS are good, but I thought that’s quick.

So I went and saw the doctor and talked him through it. At that point, I was still running 5km every day! He said the running had to stop. I had a bicuspid valve, with borderline severe/critical aortic stenosis. He said basically the bicuspid valve has hardened, which he said was quite common, and it means it’s not fully opening or closing, so it’s not pushing enough blood out and some blood is leaking back in, and my left ventricle was enlarged.

He said you’re looking at surgery in 3 months and 1 week short of 3 months later I was on the table.

It was really tough to take. I always felt I looked after my body, and it had let me down. I exercise, I eat healthily, I've got an active job, and I thought "thanks body." I wondered how had I gone my whole life without it being picked up.

I saw my clinician, Mr Da Silva, and he said because of my line of work he wanted to get me in and get me out.

For me, everything happened so quickly. When deciding on what valve, one of the main issues with me was the thought of having to go through the surgery again. With the mechanical, it’s rare you need another op. At 38 I thought I didn’t want to go through it again. It’s a valve, it’s done. I looked into warfarin and spoke to Occupational Health about returning to work, and after speaking to Mr Silva, we agreed this was the best valve for me.

The surgery itself was a strange experience. People have a range of stories, and I had an open mind about what it could be like. I had the op on the Thursday, and they woke me up at about half 6 Friday morning, which I don’t remember too much about to be honest.

Prior to the surgery, I thought it was just the valve they were replacing, but they said the aortic root was really bad, and so my ascending aorta had been replaced as well. And hearing that I just went back to running 5k a day in January, and thought if that had ruptured that’s end game, it’s over. And the Saturday and Sunday after surgery were two very dark days for me in the hospital. Then on the Monday it was like my old self kicked back in and I felt fine, and I was only on paracetamol.

I said to Mr Da Silva when I was discharged, you don’t realise you have actually saved my life. How humble he was, he just turned around and said “that’s my job.” What a job. To me my family, my kids my wife, it’s everything.

The hospital were fantastic, I was quite happy in there, but at the same time, it’s nice to just get home. We’d put some things in place to make things easier, and Tina took a couple of weeks off work to break me into things a little easier. Because it’s so hard when you’re told you can’t lift anything more than an iron - because that’s not me. So she was there to keep me on the range really.

After a couple of weeks, I felt alright. I got out walking with the dogs, and I said to Tina if I feel alright we’ll do another loop and if I don’t we’ll go back. Then after a few walks one day I went into atrial fibrillation, which is apparently very common. My wife called an ambulance because it didn’t sit right with her, and the hospital just said “think where your heart is, behind all those ribs and muscles, and they’ve cut you open and stretched you apart and poked and prodded it, so this is your hearts way of saying thanks for that, and it’s just playing up a bit.” They said it should kick back in to a normal rhythm but it could happen again. Then a week later it kicked back in and it’s been fine since.

Now, looking back, it kind of feels surreal, like it never happened. I’m running again, I’m swimming again, had my final cardiac rehab class and they said I’ve bounced back quite quickly. They said listen to your body, and let us know. So now it’s yearly checks. The only thing that was stopping me from work was an echo.

Heart Valve Voice’s page has helped me so much, and if I can in turn help somebody else out, the way it has helped me, then it adds something else to my journey. Everyone’s story is unique, but there might be that chance that this could help. And it’s pretty much listen to your bodies, and I’m telling all my friends and work colleagues now, go and see your doctor and get your heart listened to. It takes seconds.

What my surgeon said to me a few days after my operation really resonates with me now. When I said, "where do I go from here?" He said “you were quite a fit lad before, and with your heart overworking, in a years time, that’s when things will start to settle and everything will be fully healed, and your heart will be pumping properly, and you will be fitter than you were before.” And I thought wow. I thought open-heart surgery, that isn’t good news, do you bounce back? But clearly you do.

I returned to work on light duties doing desk work in September 2021 until February this year. I had a follow up echocardiogram done in December and was awaiting the report for that with a view to returning to full operational duties if all was well - which it was. I was given the green light to return to full duties on 10th February following a return to work training programme and having a risk assessment in place due to being on warfarin.

Being back on duty with my watch for the first time in just over a year was quite overwhelming. The support and reassurance they had given me and my family over the last year was amazing. It was great to get back into the swing of things with my work family."

Heart Valve Voice Executive Director, Wil Woan, said: "At Heart Valve Voice we always talk about life after heart valve disease treatment, and all the things that heart valve disease patients can do once they're treated - and I can think of no better example of that message than Joe. In a year he has gone from diagnosis to back fighting fires and saving lives, what an extraordinary journey. His story is truly inspirational."