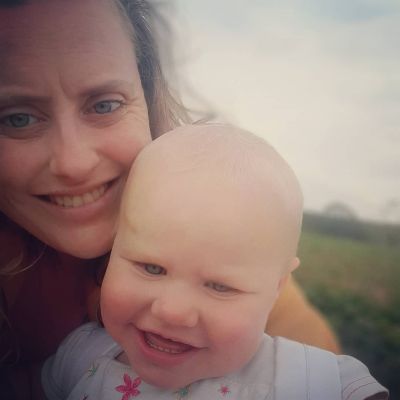 In December 2018, 33 year old Support Worker at Autism Together, Jeanine Jones was celebrating the birth of her first daughter, Phoebe. Flash forward four months and she was being raced across Liverpool to Liverpool Heart and Chest Hospital with her heart, lungs, liver, kidneys and brain starting to fail. There, she received her life saving double valve replacement.

This is her extraordinary story.

“I suppose the story starts in December when Phoebe was born. I had a difficult birth, she was born back to back, and in the days after I started to get really bad back pain. At first I thought it was muscle strain, and just a result of giving birth. But, over the next few months I started to find it difficult to breath, and the pain just wasn’t going away.

At first, the doctor thought it was giving me painkillers for my back, and thought the breathlessness was because of my asthma. We kept trying different painkillers but nothing was working. By the end of April I had no energy. I couldn’t even get up the stairs without getting out of breath. I kept being sick. Every day of the week was a constant struggle.

Things were getting really bad. Physically I was really struggling, and I was also trying to look after my new born baby. I’d seen the doctor so many times, and even called an ambulance once when the pain was really bad and shooting down my arm, but nothing was helping. Eventually, my sister said she’s taking me to A&E, and that’s when the next chapter of this story started.

I’d never heard of endocarditis before. But looking back it makes sense that it was that. I’d had a tooth infection during pregnancy, and they’d eventually pulled the tooth out. Then my symptoms after giving birth were textbook endocarditis - only thing that wasn’t was me, they said it isn’t common in young and healthy 32 year olds.

While I was in ITU things had got really bad. My surgery was scheduled for 2 days time, but I woke up one day and I couldn't breath - so they had to move fast. I had to be transferred to Liverpool Heart and Chest Hospital where Mr Kirmani would operate on me. I was put in an ambulance under blue lights and rushed across Liverpool - they even closed the Wallasey Tunnel.

It all happened so quickly after I went in to A&E. I got really bad really quickly. They thought I was going to die. My family had come in as if to say goodbye to me. I can’t imagine what it was like for them.

Dr Kirmani performed open heart surgery and gave me a double valve replacement. After the op I was in ITU for another week. Then eventually I was moved to a ward, where my rehab begun. I basically had to learn to walk again.

I was discharged in July. Little did I know that day in April when my sister took me to A&E, that it would be 3 months before I was home with Phoebe again. Let alone everything that would go on in that 3 months. After I was discharged I moved in with my parents so I could continue to recover, they live in a bungalow (no stairs!!) and could help me with childcare.

But now, over 1 year on from all that, Phoebe and I are together at our own home. She’s 1 and a half now and walking around, so I’m chasing her around. I feel absolutely fine, back to normal. I take warfarin now and I have a scar on my chest, but apart from that I live a normal new mum life. Chasing a toddler around is a good way of keeping track of your physical health!

Mr Kirmani said “I still remember the day I met Jeanine. As I was finishing an operation on another patient, someone came into my theatre to tell me about a young lady who was being transferred to our hospital in a perilous state. She had been battling an infection on her heart valves that had finally overwhelmed her. She’d been fighting it for so long that she had no more strength left to hold on to. She was already on maximal support for her heart, lungs and kidneys and her liver, brain and immune system were also shutting down. Already sedated and on a ventilator when she arrived, Jeanine didn’t have an opportunity to discuss what would happen to her. After I’d spoken to her family to warn them of the grave risks, we went straight to theatre. Thankfully, she did very well following the operation and although her recovery from the brink was slow, she was an absolute star of a patient: never complaining, always motivated to get better, and determined to do whatever she needed to. I’ll always be proud of having played a part in her recovery."

Valve disease can often start with fairly subtle symptoms: fatigue, breathlessness, chest tightness when walking or swollen ankles. With endocarditis, there might be unexplained night sweats or fevers following a relatively mild infection elsewhere in the body. These can happen to anyone at any time in their life, and having a medical professional listen on the chest with a stethoscope for murmurs can help to make the diagnosis – and start treatment – as early as possible.”

Thank you Jeanine for your extraordinary story. Heart Valve Voice CEO Wil Woan said “Undiagnosed Endocarditis is a threat to patients of all ages, and recognising the signs and symptoms of it are crucial. Thankfully, the staff at Arrowe Park and Broad Green were able to give Jeanine the care she needed when she needed it, and now she is back home with her daughter, Phoebe. Heart valve disease affects people of all ages, symptoms recognition is key. Thank you Jeanine for sharing your incredible story, and well done to Mr Kirmani for your brilliant work, and the rest of the teams at Arrowe Park and Liverpool Heart and Chest Hospital.