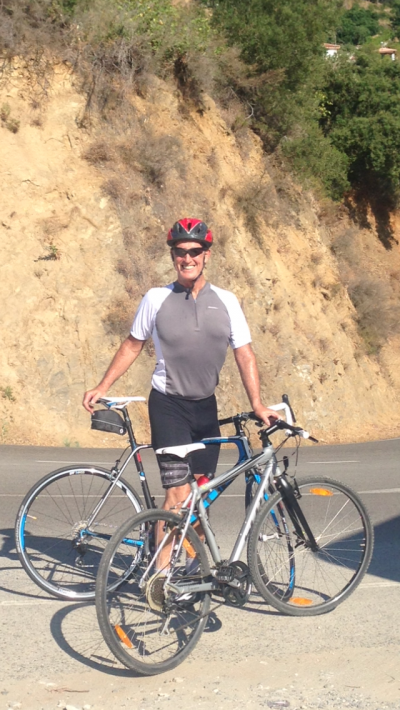 Dental Surgeon, Ian Wintrip, was diagnosed with severe heart valve disease (aortic stenosis) late last year. A keen cyclist, Ian had noticed he was running out of steam early on the bike, but put it down to signs of ageing and learned to live with the new capabilities. Eventually, though, he knew something was up and went to see his GP.

This is his heart valve disease story…

"I first noticed that things weren’t quite right through my cycling when I was on a particularly hilly trip I would run out of steam early. Early on I put this down to “hitting the wall” or poor body preparation. I took meds for high blood pressure and so maybe thought they were influencing it to, but whatever I tried nothing seemed to help.

Ultimately, and reluctantly, I thought my old ticker was just ageing and wasn’t what it used to be and I started to learn to exercise within what I felt my capabilities were. This was tough because no matter how old I get I can never quite shake that competitive edge and I’m especially bad in spinning class!! I consistently pushed myself too hard there to try and keep up with the people around me.

Eventually, though, I knew something was up. My GP had noticed a heart murmur and referred me to a cardiologist about 7 years ago. This had been monitored each year, and then 6 monthly reviews as my aortic valve was narrowing due to calcification.

Despite this close monitoring, my valve had worsened and my diagnosis had become severe. So we needed to move quickly to get things done.

Initially, the plan was for open-heart surgery, which I was pretty nervous about. I’m pretty tough and I love life, but the prospect of having your chest opened is scary. I think people think because I’m a dentist by trade I’d be used to stuff like this, but I’m used to standing over the chair, not sitting in it!!

Despite my fears and concerns, Dr Jim Hall gave me great confidence and I felt I was in the best hands at James Cook University Hospital. Eventually, we made a shared decision that I would have a TAVI instead. I was so desperate to get back to my life; back to my wife, my kids, my grandkids, my garden and my bike. I think when you’re faced with something like this, really you want to find the treatment that suits your lifestyle and your needs, and for me, TAVI was that.

I must say, that for me ‘recovery’ was an exaggeration because after a week I felt marvellous and I cannot thank enough Dr Jim Hall, Dr Paul Williams, Gemma McCalmont and all the other incredible staff at James Cook who helped me get back to feeling myself so quickly.

I set myself small goals, steady workouts with comfortable limits that helped me track my progress. Heart Valve Voice’s Mile Walk campaign is a great tool to show how regular exercise can help you understand the more subtle changes in your health both before and after treatment.

I’d also urge people to think critically about your body and your behaviour. My symptoms before my operation were not greatly marked as I had learned to deal with them, but if I had left it much longer my life would have been in danger. Talk to your family about how you're feeling and talk regularly to your GP too.

My heart valve disease story has reached its next stage and I am forever grateful to be here. It’s given me the impetus to do the things I had always fancied doing. My next big plan is to build up my strength and eventually cycle to Marbella and spend a few weeks in the Spanish sun. That plans been hampered by the virus but that will relent and when it does I’ll be ready and waiting with my bike!”

Thank you Ian for your inspirational story. Ian’s story recognises the dangers of misdiagnosing symptoms of heart valve disease and we, like Ian, encourage everyone to think about their body to understand how and why it is changing. Well done to Dr Jim Hall, Dr Paul Williams and his excellent team at James Cook on their continued excellence on delivering for heart valve disease patients.

If you or your loved one would like to share your heart valve disease story, email admin@heartvalvevoice.com