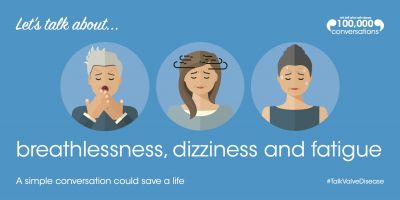 A simple conversation can save a life

We're delighted to announce that Henry Smith, MP for Crawley, has joined our 100,000 Conversations campaign to raise awareness of heart valve disease. As part of his conversation, Henry, sat down with the Chair of the All-Party Parliamentary Group for Heart Valve Disease, Steve McCabe MP, and Heart Valve Voice CEO, Wil Woan.

This year, Heart Valve Voice have pledged to start 100,000 Conversations about heart valve disease, to raise awareness of this common, serious, but treatable condition.

As part of the campaign, we have invited policymakers to sit down with us to talk about the issues facing valve disease patients, and what they can do to improve the detection, diagnosis and treatment of the condition.

You can watch Henry Smith's conversation below or on YouTube Channel here.

Henry Smith is the Conservative MP for Crawley, having been first elected in May 2010. Henry is the Vice-Chair for the All-Party Parliamentary Group for Heart Valve Disease, a dedicated supporter of Heart Valve Voice and heart valve disease patients.

Prior to his election in 2010, Henry was the leader of West Sussex Council having been elected to this position in 2003. At aged 34, Henry was the youngest county council leader in the country. He combined this with a career in property investment.