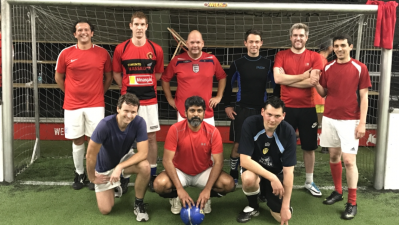 Sunday night at the 2017 EACTS Conference, there was a friendly rivalry taking place in the form of a very exciting football game! For the second year in a row, the UK, represented by the Heart Valve Voice Football team, played their hearts out, figuratively of course, and managed to come in second place to the Russian representatives.

The team, made up of surgeons and delegates of all age ranges won four out of their five matches but couldn’t quite manage to beat the very strong Russian team. However, they did manage to beat their rivals, the German team, seven to five in the riveting last match.

“What a great night,” said Heart Valve Voice CEO, Wil Woan who was also a player on the Heart Valve Voice Football team. “We were a great team and everyone brought their all. At one point I really thought we had a chance of taking the tournament but the Russians were just too strong. I’d like to thank all of my fellow teammates including two of our charity ambassadors Stuart Grant and Joe Zacharias for doing the Heart Valve Voice team proud!”

The tournament was a great success and all of the players from each team put in a terrific effort and had a great time. It is now the hope of the UK team captain Joe Zacharias, Cardiothoracic Surgeon at Blackpool Victoria Hospital to hold matches at other conferences such as the BCS conference and at the upcoming SCTS Conference in Glasgow.

“These football tournaments are not only a great way to blow off some steam and get some exercise in during these conferences,” said Joe. “But it is an excellent way to bring colleagues and friends together to connect and meet. Having the team represent Heart Valve Voice is also an opportunity to draw attention to the charity and to all of the great work that Wil and his team do to raise awareness about valve disease.”