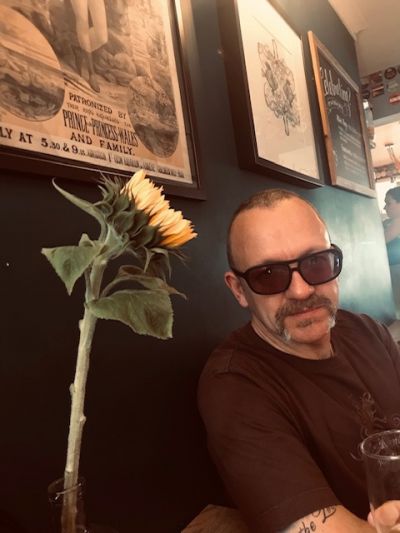 Gary Russel is a 52-year-old Civil Servant from London. After being diagnosed with heart valve disease in his twenties at a medical to join the Police Force, his valve disease story went on for two decades before he was treated in 2013.

Here is his story.

My story started in 1994 when I was at an assessment centre to join the police force. I'd passed everything, and then at the end, there was a medical. The force doctor gave me a check-over and said I had an irregular heartbeat. He thought maybe it was tension on the day, but referred me to see my GP, and said if it calms down, we can move forward. I went to my GP, who at the time I had barely ever been to, and they said they could hear a murmur, and referred me to the cardiology department for an echo. After getting my echo, they said there was a problem with my aortic valve, and my valve disease journey starts from there.

At the time, I didn't take it all in. I was fit, running regularly, working out and playing lots of sport. It all became real when I got the letter from the police saying they couldn't offer me a place. I was so disappointed. I'd gone from recruitment to the police to sat at Royal London Hospital with my dad waiting to see a cardiologist. I was only 25. The good news was that it wasn't going to affect me right now, and I would require regular check-ups before eventually receiving my treatment.

With the benefit of hindsight, I realise I was lucky. If I hadn't had the medical and the doctor hadn't been so attentive, I would never have known I was leading a completely healthy, asymptomatic lifestyle. From then on, I would see my cardiologist every year. Get my echo, see the consultant, the valve is fine, come back next year - that went on for the best part of two decades.

I was in my early 40s when Dr Dawson said there was a narrowing of the valve and they needed to keep a bit more of a close eye on me. In 2013, he said it had narrowed severely, and that we should intervene now while I was fit and well.

Now it was like wow. It had barely crossed my mind. It was a bit of a wake-up call. Then you get the slow burn towards surgery. It hit me quite hard, and I started to get anxious about my general health. I started having anxiety attacks that felt like a heart attack. I always thought I was asymptomatic, but in hindsight, I was struggling, but I don't think I wanted to accept it. I thought it was me getting older, and I always found an excuse for it, but it had a significant impact on my mental wellbeing.

I had the surgery in late august 2013, full open-heart surgery. That night before surgery was my first night ever in the hospital, then at 6 am I was on my way down to operating theatre. I had a natural valve replacement, a Bovine heart valve. In the build-up, the big decision was whether to get a synthetic or natural one, and because of my age they felt I was better off with the natural one, which may mean they need to intervene again, but it kept me off warfarin. The opinion was split, to be honest, but I discussed it with my family and clinical team, and we came to a shared decision.

My immediate recovery was a bit traumatic. I was released within a week, And on home rest with painkillers. Then one day, I had a reaction to them sat in my garden, and I started to go into palpitations, and I was blue lighted back into my local A&E with atrial fibrillation. They kept me overnight, and I was released. It was a real challenge - you've gone through the surgery, and your body is a bit broken, but you understand that, and then this happens. But I've never had that again, thankfully.

After that, I started the long slow rehab, and then gradually just beginning to get walking again. End of the road, then further and further, and then I went to cardiac rehab classes. It was strange being there, and I was the junior. I enjoyed my rehab, it gave me a chance to ground myself again, and I found it really restorative. What happened was really humbling.

I'd never been under sustained medical care, and then the reality of going under the knife and having the scars to prove it. I look back on it now, and it feels like an age ago. I feel fitter and healthier than ever. I still go to Barts once a year. Back to my usual routine, almost like the op never happens.

Now I work with no restrictions, I look after myself, I check my exercise with my cardiologist to make sure it's ok, and it always has been. The only advice is to avoid is contact sport or anything that puts extreme pressure on my chest - so bench presses are off the agenda. But I lead a completely healthy life. I'm very fortunate, and I might never have known if not for the doc, nothing had ever been picked, so I'm very thankful to him, and to everyone who has been involved in my story."

Thank you, Gary, for your incredible story. "Like Gary, many people live with heart valve disease for years - leading an asymptomatic life. For many of these people, the mental challenge they face when their valves do become a problem is immense, so it was great to hear Gary talk so openly about that challenge." Wil Woan, Heart Valve Voice CEO