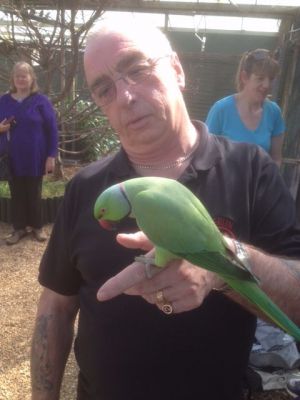 Brighton-based Steve Langton had surgery for aortic regurgitation (sometimes called a leaky valve as the valve fails to close properly) in February 2016. Since then he has been recovering well at home, where he has returned to light exercise. Here, writing before his procedure, he describes his diagnosis and treatment so far and the support he received from the Heart Valve Voice Facebook community.

I was in the Royal Military Police Special Investigation Branch, which was an active job. I also studied and taught Aikido for over 20 years, but retired due to my heart valve and respiratory conditions, so would say I lead a pretty active lifestyle. In 2012, I was diagnosed with a moderate aortic regurgitation after a heart scare of a different kind. I had been getting breathless for a while, but suddenly developed chest pains and a tingling in my arm. Once in hospital, I was diagnosed with emphysema, also known as chronic obstructive pulmonary disease (COPD), and a leaky heart valve.

Until I was told I needed surgery, I purposely avoided looking online for more information about heart valve disease, so not to scare myself. A google search directed me to the British Heart Foundation’s website and the American equivalent - which was much more helpful, if a bit dramatic! I wanted to know more details about what the surgery would involve, so I could understand it. I was curious about pains I was having. Each doctor I saw told me that I shouldn’t be having pains when I asked about it. The best way to describe the feeling is by asking you to imagine heart burn, without the burning sensation. When I told one doctor this, they gave me gaviscon! I now know that to be a symptom of heart valve disease, and what I was experiencing was chest tightness.

The doctors I saw never explained the possible outcome of my leaky valve. It was only when meeting with my surgeon that he told me a leaky valve such as mine gives you only a 50% chance of being here in 5 years. That was a shock, and again I wanted to know much more. What was going on, and why was this the case? How does the aortic valve have that much impact on life expectancy? I would like resources to find out about the process in more detail.

My main concerns approaching surgery is my recollection of the knee surgery I had a few years ago. This wasn’t too successful first time round, and so I fear that this will also be a long, drawn out process. I am worried,and certainly am not looking forward to coming round from the anaesthetic after 8-12 hours asleep!

However, I am trying to keep positive. I have taken lots of that positivity from the Heart Valve Voice Facebook community and my friends that know a bit about it. The comments and conversations I am having are all very encouraging, but it would be great to see more people who are going for surgery engage too.