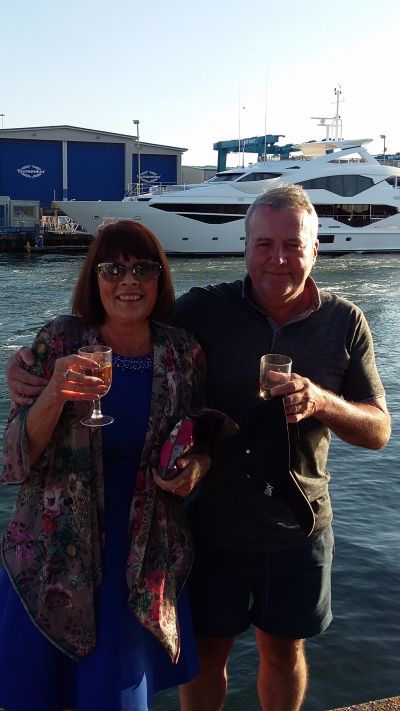 Sandra Holder’s job in retail meant she was on her feet for much of her day, so it wasn’t a surprise when she started to experience swollen ankles and feet. It wasn’t until she was diagnosed with severe aortic stenosis and was told that she was at high risk of heart failure within two years if she was not treated, that she realised it was something she should have paid more attention to. Sandra’s story serves as a warning for others of the importance of having your heart checked regularly.

Sandra Holder’s full time job as supervisor of several clothing shops in Birmingham kept her on her feet most of the time, so she wasn’t surprised her when people remarked that one of her feet was looking quite swollen. Sandra also began to notice that when flying and travelling, too, the same left foot used to swell from ankle to toes. Yet for five years Sandra wore closed shoes or boots, which seemed to help, and took the discomfort literally in her stride.

Then in 2011, she paid a visit to her GP for a routine check-up. “I’d had two previous hernia repair operations, and decided to mention my foot as well in case they were linked. He had a good look, and listened to my heart with a stethoscope. Straight away he picked up a whooshing sound, and told me I could have a leaky valve.” That whooshing sound was a heart murmur, a common indication of heart valve disease.

Sandra’s GP wasted no time in referring her to Selly Oak Hospital for further investigations which included having a camera down her throat and an angiogram, so that doctors could inspect the valves of her heart.

“My GP was right; tests confirmed that my aortic valve was definitely leaking. I was told I needed surgery and without it I’d be dead in two years. It was a lot to take in but of course I opted for the life-saving treatment.”

Sandra was the first patient booked into the operating theatre at 6 am one morning in April, 2011. Her operation, an aortic valve replacement, took about few hours and after that she stayed in the intensive care unit for four days. In most cases a patient will be sent home in four to seven days, but Sandra stayed a little bit longer as she was also given a pacemaker to help with her heart rate.

“During heart surgery, the heart is stopped and taken over by a bypass machine so that surgeons can complete their work. When it is allowed to beat on its own again, the rhythm can be out of sync. This irregular heartbeat is called atrial fibrillation (AF). Sandra’s clinical team began to treat the condition with medication immediately,” said Sandra’s cardiologist Rick Steeds from Queen Elizabeth Hospital.

When Sandra did get home, she was temporarily on warfarin and needed regular blood tests, but her partner and son were both working and transport back and forth to the hospital was difficult. Luckily the local hospital had some excellent resources available to help Sandra and it was “a huge relief” when the they arranged for a district nurse to visit her at home instead.

Sandra set to work focusing on her recovery and making sure that she healed quickly, “I was concerned about the main wound on my chest because the skin there is so thin, but the scar healed well and thanks to some resources that the nurses gave me, which took me through exercises to aid rehabilitation, from doing daily sit-ups on a stool to pace walking, I was able to get back to normal life, and driving again, in good time.”

Successful treatment means Sandra is back to doing essential shopping for her disabled son, back in her garden, enjoying walks at her holiday home in rural Welford, and most importantly, spending time with her family.

She continues to attend Dr Steeds’ clinic at Queen Elizabeth Hospital, Birmingham, for annual check-ups and also because some swelling in her left foot has returned, which could indicate that her pacemaker needs replacing. “I told Dr Steeds it’s a pity I can’t be plugged in and re-charged and he said ‘Sandra, that possibility might be closer than we think.”

In the meantime, we’re glad to see things are going well Sandra and we hope your good health continues!