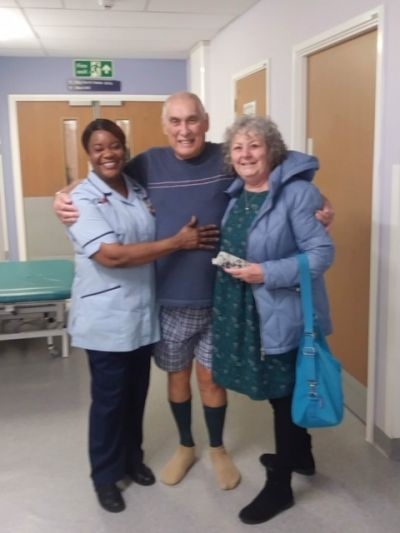 Since retiring proud grandad of nine Rob Turner has been an avid explorer of the UK and an intrepid traveller of Europe. Rob had heart a heart murmur over ten years ago during a routine GP check.

However, in July 2016 during a subsequent check he was referred for an Echocardiogram, where it was discovered that he had Aortic Stenosis. Within the space of just six months, Rob’s Aortic Stenosis had gone from moderate to severe.

Rob had never heard of heart valve disease, only remembering the ECG referral from a decade ago, which led to no further treatment. Having only experienced occasional chest pains and fatigue and feeling like his over health and fitness was good, Rob put the symptoms he was experiencing down to signs of ageing.

By 2016 these chest pains were becoming more frequent and were moving up towards his neck. His GP suggested keeping a diary of symptoms whilst waiting for a referral to get an ECG, which allowed him to see the movements in pain and the subtle but serious changes in his health. Rob got the diagnosis of Aortic Stenosis when the ECG was conducted and was monitored for the next six months.

“I was relieved to get a diagnosis and reassured that something could be done about it. Obviously, I was apprehensive for the major heart surgery”

During this six-month period Rob’s symptoms worsened, and an ECG showed he had gone from moderate to severe. Open heart surgery was suggested as the best option by surgeon Professor Domenico Pagano from Birmingham University Hospital Queen Elizabeth, and in November of 2018 Rob received an Aortic valve replacement and a double bypass.

After the surgery, Rob’s recovery was quick enough for him to be discharged after just 26 hours. However, soon after he had become critically ill again and needed to go back into critical care. During his stay in hospital Rob lost 12.5 kilograms in weight due to being ‘nil by mouth’ and a subsequent loss of appetite. However, with help from his brilliant cardiac team and local cardiac rehab sessions he attended; Rob was able to make a full recovery.

“Put your trust in the surgical team and follow their advice but don’t wrap yourself in cotton wool!”

In 2019, just 12 weeks after his surgery, Rob was back exploring and went on a two-month motorhome trip across France, Spain and Holland with his wife. Rob was also back helping as a National Observer for the Institute of Advanced Motorists where he educates drivers on improving their skills.

Rob’s incredible story shows how the symptoms of heart valve disease can often seem subtle and unrelated to a person’s overall good health, and how quickly things can go from a moderate problem to a severe one. Quality of care, regular check-ups and access to the best treatments are at the heart of what got Rob to where he is now.

Heart Valve Voice wishes him the best and hope he continues to enjoy his life. We look forward to updates on where that motorhome takes him and his wife next.