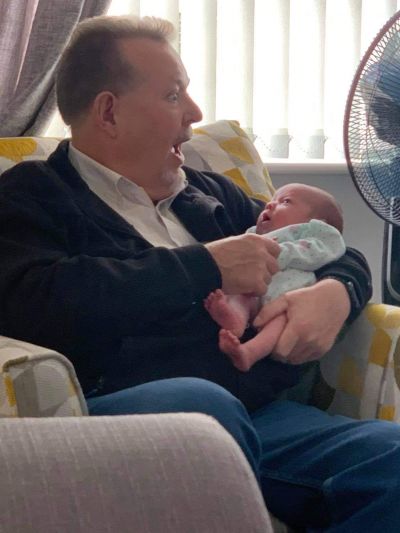 After beginning to feel breathless in 2018, Phillip Warlow was diagnosed with aortic stenosis in April 2019. With his condition deteriorating, Phillip required early intervention and received a tissue valve at Morriston Hospital, Swansea. Since being treated, Phillip is back enjoying life with his grandson, welcomed a new granddaughter into the world and now supports Heart Valve Voice to raise awareness of the disease.

This is his story:

"My story began in early 2018 when I found that if I walked any distance I was experiencing shortness of breath. In truth, I never really took much notice as when I rested the symptoms subsided. However, in January 2019 I had to attend a meeting in London, and things seemed much worse. As usual, I travelled by train to London and then the Tube to Euston Square. I arrived there without much trouble but walking to the offices I had a worrying experience on three occasions within 750 metres when intense shortness of breath, dizziness and a heavy chest feeling made me concerned. Once again, after a short while, I recovered, but during the return journey to Euston Square, it happened again.

Having researched the symptoms I hoped it would be Angina, which was manageable. I experienced further episodes up until April, not really causing too much distress but enough to cause concern.

The week before Easter was the turning point though. A meeting in North Wales on Monday morning required me to drive up on Sunday. I arrived late afternoon and went out to dinner with colleagues at a restaurant not too far away from the hotel. The return walk from the restaurant proved to be the turning point. I needed to stop and rest 5 times within a mile, and only just got back to the hotel where I laid still for 30 minutes when I got to my room. A week later I was being told I had a heart murmur and my heart valve disease journey had begun.

The journey started with blood tests and an ECG. I had to wait eight weeks for a cardiograph but was prescribed a GTN Spray to alleviate any shortness of breath. On the day of the cardiograph, I was admitted immediately to the Acute Cardiac Ward of my local hospital.

It frightened me immensely when I found I had aortic valve disease. The surgeon informed me that I possibly had 6 months if I hadn’t gone to the doctors, and the thought of possibly dying alone in a strange place was alarming. It was obviously crucial to get this treated now.

I was told by the surgeon that the tissue valve was the most suitable as it would take away the need to have to take Warfarin for life, there really was no debate it was to be a tissue valve. So we pressed forward with the surgery and the tissue valve.

Knowing you are going to a place that you have never been before frightened me a little but the staff in Morriston Hospital were brilliant. The day of the planned surgery 31st July 2019 was highly organised… No breakfast, a visit from the Anaesthetist and infinite preparation by a couple of nurses before my trip to the theatre. A needle was put in my left arm at 13:30 and I remember nothing until I woke up in ICU at about 11 pm that night with canulas, catheters, wires and tubes coming from everywhere. I felt nothing during the close to 9-hour procedure. I spent 48 hours in ICU then moved to HDU -  and the journey was well underway.

My experience post-treatment has been mixed. I have spent nearly fifty years in the workplace prior to the diagnosis and operation, some would say high-risk industries, offshore oil exploration, building great big ships in the yard where Titanic was built, IT and for the last 13 years supporting individuals with learning difficulties who can from time to time display challenging behaviour, at my last checkup the doctor said clearly that it was not the job for someone who had gone through this type of procedure, my employer agreed and retired me through ill-health it is a strange experience, but I am not finished yet.

Family life has gone on, I have a granddaughter now that I might not have seen had I not been sensible and gone to the doctors, a grandson who is taller than me and has a future hopefully that will bear fruit after passing 13 GCSE exams. Social life has been minimal, largely due to the pandemic but really I have never been a social animal, the only animal that is sociable is my wee mate Alfie the Yorkie who has been by my side throughout.

I think I chose the right time to get checked out as it appears that there are many delays being experienced UK wide largely due to the pandemic and the availability of treatment. I ask myself regularly would I be here now if I had delayed the check-up and decided to carry on regardless of my condition getting worse. I think I chose wisely and was a winner in the lottery that has arisen of who gets a turn next.

Since treatment, I will do anything to support individuals with heart valve disease and as I have worked in the not for profit sector for many years then supporting charities like Heart Valve Voice is important so the message to others in the same position is shared. I have been on a journey that has prolonged my time on this earth, that journey is not over and if anyone wishes to join me give me a call and we will do it together."

Heart Valve Voice CEO, Wil Woan, said "Thank you Phillip for sharing your story. Phillip's story highlights the importance of reacting to those red flag symptoms of breathlessness, dizziness and fatigue in a timely manner. As Phillip highlights, heart valve disease is serious, but it is treatable. Now Phillip has been treated, he can get back to spending time with his lovely family and, of course, Alfie. Thank you Phillip for sharing, and thank you for your continued support with the work we do at Heart Valve Voice. Your enthusiasm to use your experience to help others inspires others to do the same."