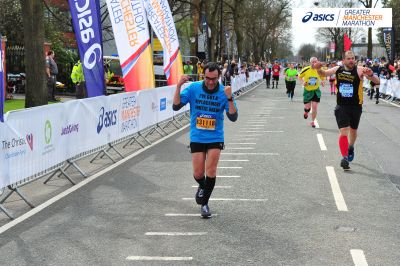 Mike Addelman at the Manchester Marathon

It was a chance query to his GP to see a rheumatologist that led to an eventual diagnosis of heart valve disease for 53 year old Mike Addelman of Manchester. An avid cyclist and runner, the diagnosis was certainly a surprise but Mike is grateful for a lucky visit to have his spine checked and the doctor’s keen sense that something wasn’t right.

Mike, first and foremost father to son Jake and husband to wife Sarah is a university press officer and formerly a journalist and nurse. Mike’s passions are music and fitness particularly running and cycling and someone who never imagined he had any issues with his heart. His diagnosis came about by chance after he began to experience some back pain that was affecting his running. He was concerned it was a result of a diagnosis of ankylosing spondylitis he had received at the age of 19. He asked his GP to refer him to a rheumatologist, Dr Pauline Ho and Manchester Royal Infirmary. Dr Ho ran some tests and concluded that Mike’s spine was perfectly fine but was concerned about a murmur she noticed in his heart and insisted he see a cardiologist urgently.

Mike feels as though Dr Ho saved his life, her recommendation to see a cardiologist led to his eventual diagnosis of aortic valve disease, a rare complication of Ankylosing Spondylitis and something that Dr Ho was able to pick up on. “Dr Ho saved my life, actually. And it’s a powerful illustration of how random diagnosis can be. I survived because of a lucky combination of factors. I’m so certain many others are not so lucky - and that’s sad as this condition should not be a death sentence.” said Mike.

Because Mike was asymptomatic, when he looks back there were some indications that something wasn’t right. He recalls feeling quite poorly after long bike rides and runs not long before his diagnosis but he put this down to tiredness. Mike’s cardiologist Dr Matthew Lucky set the ball rolling on Mike’s eventual surgery to repair his aortic valve. He was put through an angiogram that was an unpleasant experience for Mike and unfortunately didn’t reveal much. In hindsight due to the complications from his angiogram, Mike wishes he had acquired more adequate pain relief. A CT scan and echocardiogram were the other tests that Mike had before being admitted to Manchester Royal Infirmary 5 months after his initial diagnosis.

Mike recalls feeling surprised, anxious and frightened during his wait for treatment, “It was a difficult time - I had been told I had a life threatening condition, when only a few weeks before that I had cycled 70 miles up to the top of the Peaks, blissfully unaware of my heart valve disease. Shocking.” To ease his nerves, Mike set to work learning about his condition and received a lot of helpful information from the Manchester Heart Centre - at Manchester Royal Infirmary- but conducted his own research as well.

In September, 2016, Mike received an aortic valve replacement via open heart surgery and was fitted with a mechanical valve. His surgeon Mr Edward McLaughlin made sure that Mike was fully involved in the decision of what type of valve they would be using, tissue or mechanical. For Mike, mechanical was the way to go due to his very active lifestyle. His only worry was the ticking he was told he would hear, but while he still hears it at night, it hasn’t proved to be a big problem.

Following his surgery, Mike was an inpatient for seven days then was sent home to complete his recovery which included plenty of aftercare including cardiac rehab and outpatient appointments. As Mike was previously used to being so active, it was difficult for him to sit still at home, his compromise was walking. Mike spent the first three months of his recovery walking and walking, eventually working up to 10-12 mile walks daily. The best moment was when he was able to finally run again which according to Mike was an amazing experience!

Now Mike is back to work and back to his active lifestyle, in fact, he has signed on to run in the Cuore Italia awareness raising Flash Mob in Milan with Heart Valve Voice CEO Wil Woan as part of the celebrations for the European Heart Valve Disease Awareness Day, and has already signed on for next year’s London to Paris cycle ride. Mike will forever be grateful for his lucky diagnosis and for everything the clinicians did for him during his valve disease pathway, “Well, I guess I wouldn’t’ be here to tell the tale without the dedicated team of NHS doctors, nurses and physiotherapists who looked after me, and saved my life. I’ll never forget them.”