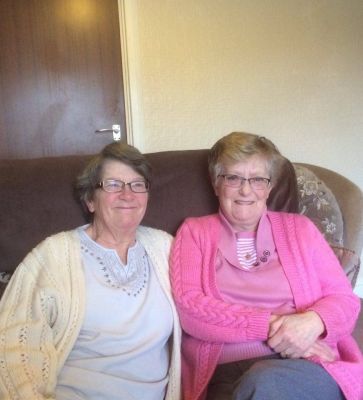 Margaret Willcock and her sister

Margaret Willcock was prescribed antibiotics for a chest infection, before it was finally realised that she had heart valve disease. In this blog she advises patients to ask their GP to check their heart with a stethoscope and to not to be worried about treatment. “It’s well worth it,” she says from experience.

I hadn’t really been unwell before, and rarely visited my GP. But in 2002 I developed breathing difficulties, so went to visit my doctor. After a check-up, he told me that I had a chest infection and prescribed antibiotics. The antibiotics didn’t help though and I was forced to return the the doctors again as I was feeling so ill. From here, my GP sent me to the hospital where I was diagnosed with pneumonia and a leaky heart valve. According to the doctors at Bolton Hospital, the issue with my valve was something I’d had since birth, but had never been identified previously.

When I was told I had heart valve disease I was absolutely terrified! My sister’s sister-in-law had passed away from heart valve disease a few years prior to this, and knowing what she had gone through made me concerned. However, my consultant at the Royal Bolton was great. She sat down and went through everything with me, explaining the whole treatment process and reassuring me. They kept me in hospital for 14 weeks before my operation due to the pneumonia. Once this cleared, they booked me in for an operation at Manchester Royal. I was to have an aortic valve replacement and a heart bypass. The consultant explained that the bypass was not needed immediately, but would need doing in a few years.

I cannot praise the staff at both Bolton Royal and Manchester Royal enough. They really looked after me; even the ambulance drivers who took me from Bolton to Manchester were reassuring and friendly. It was my first major operation, so naturally I was nervous.

I had my operation on 5th April 2002, and was sent home on the 10th. I had been in hospital for so long by this point that I was just filled with relief! I had already started to feel better as the pneumonia had gone, but after my surgery I soon began to feel much more like myself. I was told to take things very easy for the first stage of recovery, and when I returned to see the surgeon after six weeks, they were pleased with my progress.

The cardiac nurses had advised me of activities that I should and shouldn’t do, so I closely followed their advice. After this initial rest, I had 14 weeks of rehabilitation which was provided by the NHS at Bolton Royal. This really made me feel better, and gave me the chance to learn the exercises for my daily routine in a safe way with a specialist. I was able to return to work after six weeks.

My advice for anyone who thinks they may have heart valve disease is to go and get checked out. Arranging and attending an appointment with your GP takes no time at all, and if you do require treatment, do not be worried. The fear of the unknown is natural, but once you reach the other side it is well worth it - the difference it makes to your quality of life is unbelievable. You have to be determined that you’re going to get better! Use your common sense, and listen to what the doctors and nurses say. I was advised to build my strength slowly. I started with a 10- minute walk, and 12 months after my operation, I was walking 4.5 miles to work each day.

I even go line-dancing! This procedure has given me a new lease of life, and I am pleased to say that 14 years later I’m still going strong. Had my heart valve disease not been spotted when it was, I wouldn’t have lived.

I fully back the saying “the more we listen the more lives we save!”