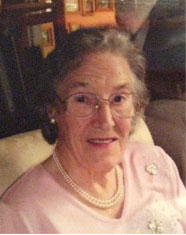 Although Lydia Monk will never know it, her experience of heart valve disease proved to be the inspiration for the birth of Heart Valve Voice and its campaign to transform treatment for patients across the UK.

Lydia was a fiercely independent 91-year-old lady. She lived alone but coped superbly and was not averse to planting several hundred bedding plants in a day.

It was only when undergoing pre-assessment for a minor operation that she was found to have a heart murmur. It was the sign of a tightly narrowed aortic valve; a condition known as aortic stenosis. The aortic valve is the main valve which leads out of the heart and sometimes narrows due to “wear and tear” as we get older. Left untreated this condition leads to breathlessness, chest pains, blackouts and eventually death.

Lydia had gradually become breathless and started to experience chest tightness when walking up hills. She had put these symptoms down to normal ageing and hadn’t wanted to trouble her GP.

Lydia received a valve replacement, but, although the procedure went well, it came too late for her. She became gradually weaker and passed away a few weeks later.

This may have been the end of the story had it not been for her grandson, who was determined that her suffering should not be in vain. He approached his friend, cardiac surgeon, Prof. Ben Bridgewater with the idea of creating a patient charity to raise awareness of heart valve disease and campaign for better diagnosis. Ben agreed to take on the role of the charity’s first Chair and brought together a group of patients and experts in the field to form Heart Valve Voice.

Since that time, the charity has gone from strength-to-strength. Each year, more patients are being diagnosed and treated as a result of Heart Valve Voice’s work; and for that we have to thank Lydia for the inspiration she provided.

In memory of Lydia, please give your voice to our campaign…