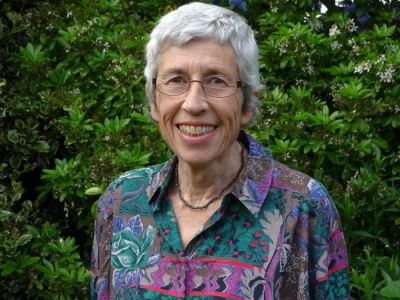 Katharine Greenland lives a calm and quiet life in Norfolk with her twin sister Christine and their dog. She keeps herself active and busy by getting out and meeting new people, exploring the outdoors and getting involved in the local village activities. Her heart had never been a real concern to her until about six years ago when a chest infection prompted her to visit a respiratory consultant. The chest infection turned out to be atypical pneumonia, but while running tests for the infection the consultant also heard an unrelated heart murmur.

Katharine was referred by her consultant for an echocardiogram. During the echo, the technician performing the scan commented on the state of Katharine’s mitral valve, saying that it was ‘seriously floppy’ and would need further tests to determine what her next steps would be. A few months later Katharine was seen by a cardiologist who prescribed medication and monitoring as treatment was an almost certain possibility and sooner rather than later.

Katharine was surprised to find she had mitral valve disease as she didn't think she had any symptoms. However when she found out what the symptoms were, she realised that she had been slightly breathless on exertion in the past, but had always attributed it to the ageing process. As her symptoms progressed, Katharine was put forward for a mitral valve repair and received her minimally invasive keyhole treatment at Basildon Hospital at the age of 67.

She wasn’t worried about her treatment as everything was clearly explained to her by the consultants who also provided her with plenty of reading material about valve disease. Katharine was right not to worry as her treatment was a success and overall she had an amazing experience. “There were so many talented people involved in my care and everything was done to plan,” said Katharine. “While I didn’t feel 100% right after my surgery, I was right as rain a couple of days later and was surprised how quickly I started feeling like my old self.”

Katharine’s recovery went fairly smoothly and within three weeks of her treatment she was able to walk a mile or more easily and within just six weeks she went on a six mile walk just like she used to do before her diagnosis. She was feeling so good so soon the she felt some of the recovery advice was too restrictive including not being allowed to drive for six weeks after surgery. It was helpful to have her sister, Christine around to assist her with her day to day tasks and she was able to repay the favour when only six months later Christine was also undergoing a mitral valve repair surgery.

Her surgeon, Inderpaul Birdi explains why he considered a less invasive approach call minimally invasive surgery. “With minimally invasive valve disease surgery, the heart is accessed through a small incision usually on the right side of the chest which can be as small as five centimetres long. The surgeon then inserts a high-definition camera that will allow them the see the heart and using specialised tools they can then repair or replace the damaged valve, this often means a much shorter stay in hospital.”

Katherine adds, “My life is finally back to normal now. This whole experience has been quite an eye-opener to my overall health and to the skills involved to perform the procedures in a surgery like mine. It’s been great to have the support of the doctors and nurses involved in my care and to have my sister around to help in my recovery. It was also so helpful to be able to take what I learned from my experience with valve disease and pass that knowledge onto my sister who went through the same thing not long after I did!”

We’re so happy everything went well for you Katharine!