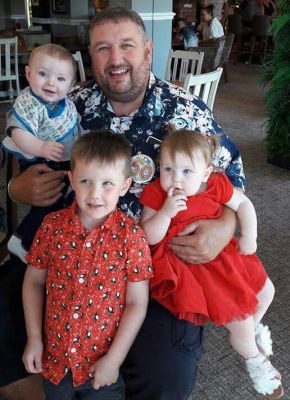 Ian Brown, a 52-year-old football fanatic and avid fisherman, has been married to his beloved wife Kay for 28 years. Together with daughters Emma and Sophie, they faced his heart valve disease challenge by finding strength in unity and family. Their story begins in the year 2000.

“I was diagnosed with bacterial endocarditis in February 2000 after feeling unwell for several weeks. I was only 32 at the time but had been suffering from a high temperature, shortness of breath, general aches and severe bouts of sweating. Sometimes that sweating was so bad my wife had to change the bedsheets at night!!

I’ve always suffered from asthma, so I know what a tight chest feels like, but this breathlessness was very different and I knew something was up. At first, the doctors thought it might be a severe case of the flu, but after my ankles swelled up to the size of watermelons we became very concerned and made an appointment with our family GP. He listened to my chest, heard a heart murmur and sent me to the hospital for further tests.

Even though I was very unwell, it was so easy to explain away my symptoms. The aches, the high fever, the intense sweating, I just thought it was a particularly rough bout of flu. It became a worry when I just didn’t seem to be getting better despite being ill for three weeks or so. Then my ankles swelled up and my wife took control and did what she has been doing for a very long time - took care of me.

I was admitted to Leighton Hospital, in Crewe, and after undergoing scans, blood tests and x-rays I was transferred to Wythenshawe Hospital, where a much more detailed explanation of what I was suffering from was given, and they explained to me and my family how they were going to treat it.

The feeling of being told I had heart valve disease was a mixture of confusion and shock. I had never heard of heart valve disease and neither my wife or I knew anything about it. That shock quickly turned into worry when I was told that the damage done to my aortic valve had put me at risk of heart failure. At the time, I thought that meant I was going to die, but as soon as the brilliant cardiologist at Wythenshaw spoke to me I was put at ease and I felt safe being in such good hands.

On March 5th, 2000, I had my aortic valve replaced. I can’t explain what this time was like and I am so thankful to have had the support of my family and the team at Wythenshawe. I was incredibly nervous going for my operation, but the clinical team, my family and my friends did everything they could to put me at ease and make me feel comfortable. I owe them all so much.

After my op, my recovery was quite slow as I still had the infection from the bacterial endocarditis. The first week was really hard. Physiotherapy was a real challenge but I did all I could to follow their guidance and get my body and mind moving in the right direction.

After a month I was feeling a bit more like myself. I was still a bit breathless, but the infection had gone and once I had completed the “stairs test” I was told I could go home. It was quite an emotional time. We’d been through so much and I had so missed the warm comfort of being at home. I could not wait to be at home with my wife and family.

During your recovery, it is important to take your time and try to understand your body. You need to find a balance between pushing yourself to ensure your recovery is on schedule and understanding that you need to do it in your own time. I made sure I got plenty of rest and went for regular short walks. Heart Valve Voice’s Mile Walk campaign is a great example of how important walking is. Even if you can’t do a mile at first, regular walking helps you understand your body and how your recovery is going.

My experience with heart valve disease was quite bad due to the length of time it took to diagnose me. But it doesn’t have to be like that now. Organisations like Heart Valve Voice are doing so much to raise awareness of the signs and symptoms of heart valve disease, and they have so much information to help new patients and their families through their treatment pathway.

My advice to new patients is to try not to worry too much and don’t be frightened to ask the most basic question if you’re unsure about anything. Take your time, and surround yourself with people you love.

The affect of heart valve disease on my life has been massive. I treat every day as a bonus, and I am so thankful to Mr Bridgewater and the incredible team at Wythenshawe Hospital. As soon as I was with them I never once felt that I wouldn’t recover from this. I knew my life was in safe hands and to this day I owe them so much.

These days I’m surrounded by my beautiful wife, my two beautiful daughters, Emma and Sophie, and our three grandchildren, Oscar 7, Aoife 4 and Reggie 3. Due to being on warfarin, I’ve had to give up playing football and my hopes and dreams of playing for Liverpool, and instead become a dedicated follower of Northwich Victoria - which I’ll take.”

Thank you, Ian, for your incredible story. Yours and your families bravery and togetherness are inspiring. Well done to Dr Bridgewater and his wonderful team on another inspirational story. If you or anyone you know have a story to share, please get in touch and let us know.