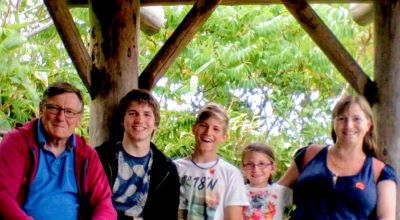 Howard Lockett and his family

Despite his cancer and ill health, Howard has lived a very fulfilling life as a teacher of science and maths, a gymnastics judge and the father of three wonderful children. For most of us, this busy lifestyle would be a challenge, but for Howard Lockett, diagnosed with Hodgkins Disease thirty years ago, it was even more so.

Chemotherapy and radiation treatment had ruled out his chances of natural fatherhood, so he and wife Carol chose IVF and much to their joy, it was successful. They went onto have three healthy children and their middle child, Nathanael (16) is now a champion gymnast! Through his enthusiastic mentoring of his son, Howard’s involvement has taken him to that of regional gymnastics judge, just to add a bit more to his busy schedule.

Howard has never let his cancer diagnosis and treatment bring him or his family down. However, beneath this picture of positivity, optimism and happy family life, a second life-changing illness lurked. It had remained hidden until 2012, but when Howard began experiencing symptoms similar to the symptoms he experienced with his Hodgkins Disease he went straight to his consultant at Preston Hospital.

When tests ruled out any connection to Hodgkins disease, further investigation picked up a heart murmur and Howard was referred to the cardiology clinic. An angiogram signalled a faulty aortic valve, also known as aortic stenosis and a further referral to Russell Milner, Cardiothoracic Surgeon from the Lancashire Cardiac Centre in Blackpool revealed a problem of a much more alarming nature.

“My heart was almost fully calcified, turning to stone. Mr Milner told me this was due to the chemotherapy and radiation treatment from years before,” said Howard. “The valves and aortic tree (arteries leading from the aortic valve to the brain) were hardened to the extent that they were actually kinked. Only the constantly pumping muscles of my heart were free of calcification.”

The specialist team then decided it may be best to perform a double bypass using grafted leg veins. The operation went ahead, but the calcium build-up was so extensive and the risk of it chipping off and entering the bloodstream so real, that it was only partially successful.

The only other procedure possible was TAVI (transcatheter aortic valve implantation), normally intended for much older, frailer, patients than Howard, who was 63 at the time. With no other options that would provide a better outcome, the team at Blackpool went ahead ahead with the procedure.

“I was feeling distinctly unwell when I went for my first post-op assessment. After an echocardiogram, my consultant booked me a bed on a ward,” recalled Howard. “They informed me that the implanted valve was in the wrong place.”

For Howard’s surgical team, the dangers of working around the heavily calcified aortic tree a third time were too great. They asked a specialist from Guy’s and St Thomas’ Hospital in London who agreed to travel to Blackpool to carry out the remedial TAVI procedure. This final treatment was a success, they were able to fit a new valve within the one already in place which allowed for better blood flow.

“I am incredibly appreciative of just how much effort had been put in by the team at Blackpool Hospital and St Thomas’ to reduce my problem to something that is manageable,” said Howard. “What I wanted more than anything is not a longer life, but a trouble-free life, free of warfarin and its restrictions, so that I can look after my family.”

We’re so glad to hear that you’re feeling better Howard, we wish you the best with all of your endeavours!