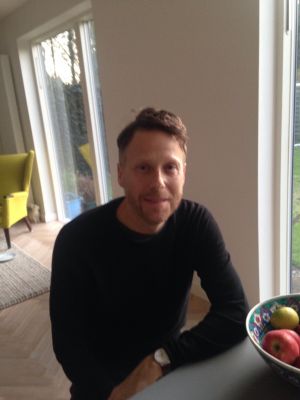 While heart valve disease is a condition that most often affects an older cohort of patients, it can be found in anyone. Meet Ed Smith; Ed, in his late forties, found himself slowing down, getting breathless and lacking the energy that he once had. He had always kept himself fit and stayed quite active but as he got a bit older he was finding his usual activities were getting harder to do.

After his GP referral and receiving a series of tests including an echocardiogram, Ed was diagnosed with heart valve disease. The diagnosis came as a surprise to Ed and his wife Rachael because Ed had always been healthy and simply seemed too young to be diagnosed with heart valve disease. It was soon determined that Ed would need to undergo valve replacement surgery and be fitted with a mechanical valve.

The prospect of having surgery isn’t always easy to cope with. Rachael soon noticed that Ed was withdrawing and she could see that he seemed fearful of what he was about to face. While she did her best to support him in any way she could, she knew that the best thing for Ed would be to speak to someone who had been though a similar experience. That’s when she reached out to Heart Valve Voice to see if we could help.

The solution for us was an easy one, Ed needed to speak to our patient ambassador Guy Maddox. Guy, also a younger heart valve disease patient, was diagnosed with the disease at the age of 35 and received a mechanical valve six years later. “The diagnosis of HVD was a surprise to me, but I was relieved to have an explanation for my symptoms,” explains Guy. “My condition had felt life-limiting – I was only going to get slower, more tired and my career development opportunities felt limited - so I was very positive about the prospect of surgery. My new mechanical heart valve feels like the start of a new chapter in my life.”

We put Guy and Ed into contact with one another. It was a wonderful opportunity for Ed to hear about the surgery he was about to receive from someone who had been through it as well. Guy was able to talk Ed through what he could expect during and after his surgery and answer any questions or concerns Ed had. While Guy couldn’t provide any technical or medical advice, what he could provide was a first-hand patient account of the entire experience from the wait before surgery though to the recovery process.

Ed was able to go into his surgery feeling much better equipped with the knowledge of some of the things he could expect from the process and how he might feel during his recovery. The surgery was a success and while some aspects were unexpected and new to Ed and Rachael, they both felt that talking to Guy had been very beneficial. Ed has put many of Guy’s tips about sleeping, easing himself back into exercise and how to manage his medication into practice and they have all helped with his recovery.

“Being able to talk to Guy was so useful, he helped me though the worries and I’m very grateful to him. My recovery has been pretty good, I’m challenging myself to walk a bit further each day and I’m persisting with the breathing exercises.” Said Ed. “Guy also told me sleeping would be a bit tough at first, which it is, but with the amazing support of my wife Rachel I’m optimistically looking forward to getting back to full fitness levels”

Now Ed wants to lend his support in the same way Guy supported him and is available to anyone who needs some guidance and a shoulder to lean on.

We wish Ed the best during his recovery.