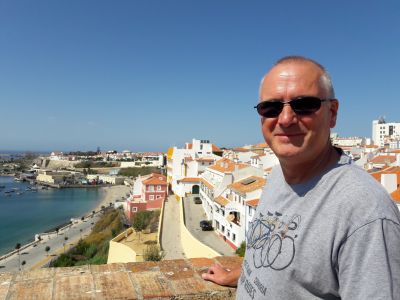 In 2019, 57-year-old Derrick Johns found out he had a heart murmur. After further tests, he was diagnosed with aortic stenosis with a bicuspid aortic valve. A keen cyclist, Derrick had experienced no symptoms. However, his valve disease began to deteriorate, and he required urgent intervention. Despite the pressure COVID-19 has placed on the health service and delays to his surgery, Derrick received has now recieved life-saving treatment and is now looking forward to the rest of his life.

"It was a week before Christmas 2019 that my story really began.

During a routine screening with an occupational doctor, I was made aware that there was something wrong. The doctor had detected a heart murmur that I was told was very pronounced. I was advised to see my GP as soon as possible. On leaving the consultation room, the need for urgency was reinforced to me.

Without delay, I got the first available appointment to see a GP. After another check with a stethoscope, I was told that I required a referral for further tests with a cardiologist. This came as somewhat of a surprise that there could be anything wrong to warrant such concern. After all, up until that time, I had neither felt nor displayed any symptoms at all. I was a keen cyclist and walker and had experienced no problems.

Until referral came through, delayed by the Christmas break, I was told to carry on with life as usual but not to 'gun for it' when exercising.

It was early March when my referral came through with a consultant at New Cross Hospital, Wolverhampton. Again, no symptoms were evident on close questioning, but a possible bicuspid valve was diagnosed after further examination. Again, no restrictions on activities were made. A scan was organised, but before the appointment, the effects of Covid took hold in the UK. Delayed due to the pandemic, it was late June before my scan was done, and the results of the test revealed severe aortic stenosis and bicuspid aortic valve. An urgent follow-up appointment was made to discuss management options. Still asymptomatic, a CT angiogram was organised and referred to a medical decision panel (MDT) regarding seeing a surgeon for assessment.

I was told which symptoms to watch for and alert my clinician in the event of chest pain. I was also advised to avoid very strenuous activities.

My CT heart contrast was performed in late August with my appointment with the surgeon set for early September. During this meeting, the results of the CT scan were revealed. I was now deemed 'critical'. This came as a real shock. By this time, I had also noticed that occasionally I felt what I described as a 'knot' or 'bruise' type sensation in my chest but nothing pronounced or frequent. They had been my only symptoms and were very subtle.

Because of the now critical state, the discussion turned to my options. The implications were explained to me very clearly, and the prognosis for no intervention was not good, to say the least. I was given plenty of opportunities to discuss my options and ask questions.

To save valuable time I agreed and consented to aortic valve replacement with a mechanical valve after explanation of choices between mechanical versus organic, also diagnostic coronary angiography to see whether a bypass would be necessary was arranged.

Thankfully, this proved not to be the case.

My admission date for surgery came through within days, and I was admitted, prepped and ready for my operation - only for it to be cancelled as I was about to be wheeled into theatre. A lack of ICU beds was to blame.

The staff were as disappointed as I was and did everything possible to avoid cancellation.

The operation was carried out successfully the following week. It was only during my readmission after talking to others did I really take in how fortunate I had been in 'chance' diagnoses and rapid intervention.

Medical staff also reinforced my good fortune of being diagnosed before I'd suffered heart failure, further damage or even sudden death given my still subtle to no symptoms. Since reading articles and others' stories on the Heart Valve Voice website, I'm so grateful for my clinical team's prompt response.

Sadly due to Covid, physio has been restricted to telephone, and online resource and the personal elements have not been available. Group sessions would also have given a chance to talk to others and help 'calibrate' my own recovery.

With my mechanical valve, I'm now adapting to life on Warfarin. The possibility of checking my own INR presents benefits, not least the convenience of not being tied to appointments. If I can reassure the accuracy of the machine and support, I think it may be a good option for me, particularly post-pandemic, when we can travel more freely. I haven't committed yet, but I do feel inclined.

I thank all support and medical staff, particularly at New Cross hospital Wolverhampton. The staff in the Coronary Care Unit, where I was treated were nothing short of marvellous. The care, consideration and treatment received I can only describe as excellent.

My heartfelt thanks go to all of you!"

Heart Valve Voice CEO Wil Woan said "Thank you, Derrick, for sharing your story. Derrick's shines a light on how the NHS has continued to treat patients safely despite the pressures of COVID19. Patients awaiting treatment should take confidence from the professionalism of Derrick's care team. Well done to Mr Mahmoud Abdelaziz and the team at Wolverhampton for their brilliant work despite the extraordinary challenges of COVID-19.