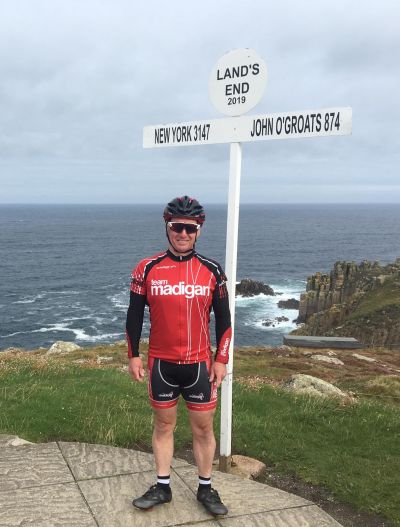 David Blair believed he was at the top of his health when he got diagnosed with heart valve disease. He had simply put his symptoms down to getting older. Whilst training to complete the difficult cycle from Lands End to John O’Groats in ten days. David attended a routine check up at his GP in the summer of 2018 just and was diagnosed with aortic stenosis. Now a year on, David is back on the bike with a new energy and ready to complete the challenge of cycling across the UK.

Being an active guy from Northern Ireland, David has always been a bit of sport fanatic enjoying both cycling and sailing. To challenge himself, David started to work towards a challenge of cycling from Lands End to John O’Groats in ten days. The bike ride averages 108 miles every day and months of training is needed to complete the journey.

In preparation, David attended a routine GP check up. During a stethoscope examination his GP heard a murmur and referred him for further investigation with a cardiologist. The only symptoms David experienced was being light head when standing up and tiredness in the afternoon. However, he always put this down to his age rather than his heart. Especially as he had such an active lifestyle. An ECG (echocardiogram) was performed and David was immediately diagnosed with Aortic Stenosis.

“I was very surprised but I knew I had to have the surgery as I was told my life expectancy was 3-5 years if I didn’t have the operation.”

Just before Christmas in 2018 David went into hospital to have his aortic valve replacement surgery. David was discharged a few days later and the first day at home he went out for a gentle walk to get back him to his exercise routine. David only experience some discomfort around his chest but energy levels were much better. Surprised he was doing so well, and under consult from his clinician, David increased his exercise. David continued with the Cardiac rehab but due to his overall health he got back to an active lifestyle quicker than normal. Only three weeks after surgery, David was back on the bike and enjoying the thrills of exercise again.

“Although exercise helped, I believe having a positive mental attitude was importance. My surgeon told me I was fixed and I can do anything I wanted to do afterwards, and I believed him!”

Only four months later, David joined two other patients to participate in a cycle ride from London to Paris for Heart Valve Voice. In attending Euro PCR conference David got to share his story with clinicians across Europe and the UK. After the success of the three day journey with Heart Valve Voice David continue his cycling challenges and recently completed Lands End to John O’Groats in ten days!

We wish David a successful journey and hope he continues to raise awareness of the disease.