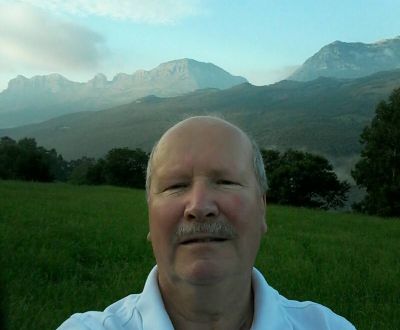 After suffering a cardiac arrest at his GP surgery three years ago, Christopher Saul was diagnosed with aortic stenosis, and given regular echos to monitor his condition. In February 2020 his aortic stenosis had deteriorated, and he required urgent intervention. After his treatment was delayed due to Covid, Christopher eventually received his new valve in October 2020.

This is his story:

“My story starts six years ago when I suffered a heart attack. I was a taxi driver, and one day my arms started to feel really heavy. I went to the chemist that evening to get some aspirin, and the next morning I went to the GP for a blood test and an ECG. When I went back the following week for the results, they said, "don't go anywhere. You've had a heart attack." Which came as quite a shock!! I was admitted to the hospital, and after a few days, they brought my blood pressure back to normal, and within one week, I was discharged.

While I was in the hospital, my blood pressure dropped dangerously low, and they weren’t sure I would survive the night. But the next morning, my blood pressure gradually crept back up, and I got better and was eventually discharged. The doctors were deliberating whether to stent any of the arteries or not, and in the end, they decided not to do any stents.

Then, three years later, I had a cardiac arrest in the GP surgery and was admitted to Musgrove Park Hospital, where I was given a CT, and then they discovered a blocked artery. I was given two or three stents at Musgrove and another, more awkward, stent at Bristol. It was during this episode that I was diagnosed with aortic stenosis. After I was discharged, I was told it would be monitored regularly. I received echos for the next three years, including stress echos.

At my echo in February 2020, it was discovered that my aortic stenosis has become critical, and I was referred to Bristol for urgent surgery. Unfortunately, Covid hit, and the procedure was delayed. Finally, I was given a date in October.

The wait for surgery was ok. It was just stressful really because of the situation. In February, the consultant said I needed it in 2 or 3 months, and I didn’t get treated till October. It was a lot to deal with, but there isn’t much you can do about it. During that time, there was also some confusion with some test results, which slowed things down further. It

I was treated at Bristol by Mr Cha Rajakaruna, who was excellent. I know how lucky I was to get the operation, to be honest. Because of Covid and the ramifications, people have to wait a long time, and the NHS is under tremendous pressure. So despite delays, I know I was lucky, and I was so glad when I got the letter telling me when to come in.

After discussing things with my clinician and my wife, Ellen, I decided to have a tissue valve, which I felt best suited my situation and life.

I had the operation on October 3rd, and it went very well. However, during the procedure, it was discovered that the diseased valve was bicuspid, with two flaps instead of the usual three. Unfortunately, two years ago, our son passed away at the age of 47. His post-mortem showed an enlarged heart caused by an undiagnosed bicuspid aorta - which I was told can be hereditary.

My recovery from the operation was good, and after a week in the hospital, I was discharged back home to my wife. I spent the first week back home on a recliner in the living room because I couldn't get comfortable at night, but I felt well enough to sleep in the proper bed after a week or so.

I went to rehab classes for six sessions after my operation before closing it down for Covid again. The first one back was a few weeks ago, though, and I'm thrilled to be back there. The classes are the best thing. I don't have much self-discipline with exercise, but the classes keep me going, and I actually enjoy it in a masochistic way - because I know it's good for me.

In terms of the treatment I received, I can't fault anything, really. Obviously, I was totally dependant on them. I was only in there a week for the operation, but it was difficult for them because they were so short of beds because of Covid. But the staff were just brilliant. The care I received was faultless.

Now I'm back home, and my wife and I are planning on moving home. I'm able to get out and go for walks out to West Bay. I feel fine, good even. Occasionally I can get tired walking uphill, so I think I'm still recovering a bit. I'm also a bit overweight through a lack of exercise. Still, the cardiac classes are helping with that, and I've challenged myself to be fit enough to play golf within a year. So I need to lose a bit of weight and get back out on the course!!”

Heart Valve Voice CEO Wil Woan said, "Thank you, Chris, for sharing your story. Christopher's story highlights the impact of Covid on valve disease patients and the stress and strains the uncertainty of when you will be treated causes. We're delighted Chris received his treatment and hope all valve disease patients who have experienced delays will be treated soon. Our JustTreatUs Campaign aims to highlight this exact issue, and I would encourage all valve disease patients, treated or untreated, to support the campaign by writing to their Members of Parliament. Click here to find out more about that campaign here."