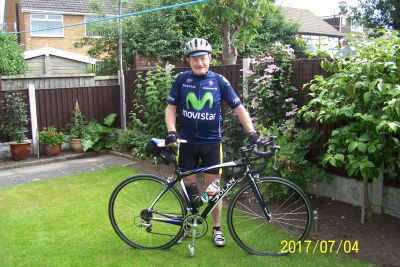 Bill’s first indication that he had an issue with his heart was in 2014. He wasn’t feeling himself and spoke to his brother, who had recently had a pacemaker fitted and recommended he get his heart rate checked. After seeing his GP he underwent a 24 hour heart rate test which showed that not only had his heart rate slowed down to 35 beat per min (bpm) from the normal rate of 45, but also that his heart was stopping momentarily both in the day and during the night without him realising. He was soon fitted with a pacemaker and felt instantly better.

After getting his pacemaker fitted, Bill went in for regular check ups to make sure everything was still ticking along. Over the year, everything checked out and he was doing well however on the 18 December, 2015 his annual test had shown that his aortic valve had become hardened quite quickly and that he would need to see the team at LHCH.

Bill underwent various tests and a CT scan to determine what the best plan of action would be. He was informed that he would need to have his valve replaced which would require open heart surgery. Bill was not very keen on the idea of going in for such a drastic surgery and expressed his concerns. His cardiologist, Dr Debbie Harrington, suggested another option for Bill - to have him placed in the UK TAVI trial being run at Leicester University. The UK TAVI Trial is a multi-centre randomised controlled trial that compares the clinical and cost effectiveness of TAVI with conventional surgical valve replacement. After explaining that there was a 50/50 chance that he would receive a TAVI procedure, Bill decided to go for it and was lucky enough to be randomly chosen.

On 30 March, 2016 Bill had his TAVI procedure carried out by Dr Joe Mills and Dr Claire Appleby. The procedure went well and apart from a strange sensation, was quick and painless, in fact, he went in for his treatment at 11am and was in recovery by 12.30pm. Dr Mills checked in on Bill and found he was feeling quite well, so much so Dr Mills jokingly questioned whether Bill might want to go home the same day! Bill assured Dr Mills that an overnight stay in the hospital was probably for the best, to be on the safe side. Bill was however safely discharged the next day and he felt ‘right as rain’.

Now Bill is as active as ever, keeping up with his cycling and is back to his 150 miles a week. “It has been a real game changer for me, having this treatment. I just thought that at 82 I would have to slow down and stop doing some of things l loved, but that is no longer the case!” said Bill, “I’m fitter than I have been in a long time and I have lots of energy. I can’t thank the doctors at LHCH and Chester Hospital enough, they really helped to give me my life back.”

What an amazing story Bill, keep up the cycling and we wish you all the best!