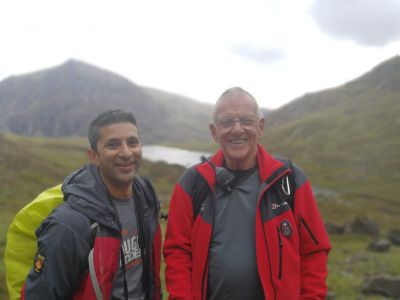 Bill Dean from Mold, North Wales, isn't your typical 77 year old. Bill spends most of his free time in the mountains of Snowdonia as a Mountain Rescue Volunteer, a job he’s been proud to do for the past 50 years. However, a number of years ago Bill worried he wouldn’t be able to continue with his volunteer work when he started to get breathless walking uphill, until an aortic heart valve replacement in 2015 made sure he was back on the mountains feeling better than ever.

Bill has worked alongside many other volunteers, some of whom are paramedics, on the magnificent mountains of Snowdonia for fifty years. His volunteer work has kept him active and fulfilled so when he began getting breathless and falling behind his fellow volunteers Bill knew something had to be done.

Bill first became aware of being breathless when walking uphill around 2011. This condition steadily worsened. He had high blood pressure, and as a former teacher of Biology he knew he should seek specialist medical advice. His doctor listened to his heart and detected a heart murmur, one of the key indicators of heart valve disease, and arranged for an echocardiogram followed by an ultrasound scan, both at Wrexham Maelor Hospital. These tests proved conclusively that Bill would need an aortic valve replacement, and definitely within the next three years.

A year passed with Bill feeling much the same, but when he received a follow up ECG and echo test, both results showed deterioration of the valve. Then one day Bill found himself struggling to keep up with his fellow rescuers, and a colleague stayed back just to keep an eye on him. A similar incident happened a fortnight later, so when an opportunity to speak to a senior paramedic presented itself, Bill sought his advice.

“It sounds like it’s time to make the phone call and press for surgery,” his colleague said. That was in April 2015, and by June, Bill was booked in for a procedure called an angiogram, which allows a tiny camera to be passed along the veins to the heart, so that specialists can get a good look at the valves. Then followed a wait of several months during which Bill was “on tenterhooks.”

Finally progress came in late October of 2015 with a second angiogram and within weeks he was in the operating theatre where he was operated on by Bil Kirmani, Consultant Cardiac Surgeon, Liverpool Heart and Chest Hospital. What followed was a wait of a more serious nature, as Mr Kirmani explains.

“All surgery has risks, and complications can occur. In Bill’s case, it was a neurological complication, and we were worried about him for a time. However he pulled through and is a great example of a valve patient getting back their life and, in his case, to get back to work that benefits society and helps others.”

It was a good six months before Bill was back bearing stretchers on Snowdonia’s mountain passes again, but he was able to fill in time with his other interest, the far less strenuous hobby of stamp collecting.

Once Bill was back to his old self, he invited his surgeon and members of the cardio-thoracic team at Liverpool’s Heart and Chest Hospital to visit him at the rescue base. So in 2017, Mr Kirmani, along with sixteen of his fellow clinicians and their families, saw their patient back in action after his treatment in an operation of an entirely different kind.

Bill’s insider view of mountain rescue work in Wales’s first national nature reserve impressed them so much that they returned again this year (2018). This time Bill led a group of 20 people up to The Devil’s Kitchen, the huge dark gash which splits rocks and lets out plumes of what looks like steam before being blown upwards by a strong wind. It’s a natural phenomenon that Bill could only reach with much difficulty before his surgery.

“I’ve seen enough emergencies to know that life is full of uncertainties, and fortunately the complication I suffered was brief and manageable. It was a privilege to show Mr Kirmani how we operate in the mountain rescue service.”

What an amazing story and a brilliant example of why treatment for heart valve disease is so important. Keep up the great work Bill!